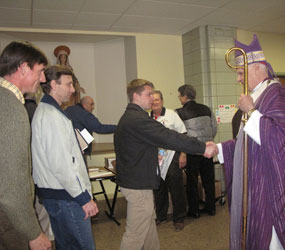 TOWSON – It was natural for Jon Oberst to attend the annual conference of the Catholic Men’s Fellowship of Maryland. A 23-year-old parishioner of St. Ursula in Parkville, he is the grandson of Gil Hoffman, the Maryland chapter’s president.

Oberst was among the more than 150 men from around the Archdiocese of Baltimore who gathered April 2 in the former home of Towson Catholic High School, on the campus of Immaculate Conception parish.

“This is the first time,” Oberst said, “and it’s not going to be my last, because the speeches were pretty inspiring.”

Oberst was particularly impressed with the presentation of Father Michael Lightner, director of campus ministry for the University of Wisconsin, Milwaukee. Father Lightner had a history of drug use and partying with women, but had a conversion after a visit to Medjugorje, the site in Bosnia where the Blessed Virgin Mary is said to have appeared.

Adoration of the Blessed Sacrament and reconciliation were offered as well. Archbishop Edwin F. O’Brien celebrated the Mass that closed the conference. During his homily, Archbishop O’Brien told attendees that “Jesus wants to bring light into the world.”

He challenged the men to join him and his fellow priests in speaking up about the dignity of human life. He said that while an unjust civil law may say one thing, “we have a deeper law.”

Monsignor James P. Farmer, pastor of St. John Parish in Westminster and chaplain of the Catholic Men’s Fellowship of Maryland, said attendees are deeply spiritual men seeking more than the concerns of a work-a-day world.

The former pastor of St. Ursula was pleased to share the day with his former associate pastor, Father Emmanuel Mensah, a native of Nigeria and regular at the conference.

“They are serious Catholics who are taking their spirituality seriously,” Father Mensah said of attendees. “I think they are really lifted when they leave here.”

Hoffman said most attendees of the annual conferences are regulars and typically in their 50s, 60s or 70s. He wants all to know they’re welcome.

“The one thing we’re really trying to do now is get more youngsters out here,” Hoffman said. “What we’re going to try is contact all the youth ministers in all the parishes and have them push it to the young people. That’s what we need.”