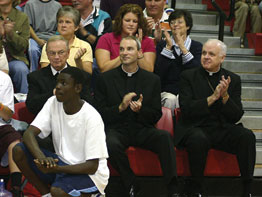 The parish team, made up of young basketball players from parishes in the Pakville/Towson area, thought they had a potent weapon when they faced the Men in Black basketball team Oct. 27 at Calvert Hall College High School, Towson.

That weapon was Rich York, a former college player for Shepherd University in West Virginia and a parishioner of Immaculate Conception, Towson, who lent his considerable presence to the team. But the Men in Black, a team of priests and seminarians from the Archdiocese of Baltimore, answered back with their own big man: Father Brian P. Nolan from St. Jane Frances de Chantal, Pasadena. Father Nolan proved to be a formidable presence under the boards, dominating in the second half of the game before a gymnasium filled with some 350 people. The priest also had a three-pointer in the first half.

But the youths stayed within 10 points throughout the game, and even closed it to a gap of just three points with 33 seconds left. In the end though, it was the Men in Black who netted the 51-46 win.

Archbishop Edwin F. O’Brien led the audience in prayer before the start of
the game.

“I’m from New York; I have a couple of problems, like who to root for – that’s been my problem ever since I came to Baltimore,” he said. “I’ve always been a Yankees fan.” That admission earned him laughter and a few gentle boos, but he earned plenty of applause when he asked if he should stay a Yankees fan or become an Orioles fan.

“If we’re going to have more men in black it’s up to you guys in the stands to make a move,” he said. “We don’t want to force anybody into it, but I invite you, with your parents’ support, to make a move.” He added that women religious were the happiest women he knew and urged young men and women who really want to make a difference to “think vocations.”

But those with a vocation were thinking moves. Sister Joan Kelly, S.N.D. de N., who, along with Sister Kathleen White, O.S.B., played for the parish team, took the first shot but couldn’t capitalize. Undeterred, the parish team put the first numbers on the scoreboard.

Throughout the game, Father Jesse Bolger, associate pastor of St. Margaret, Bel Air, proved pivotal in transition play. His deft ball-handling, combined with being one of the few – very few – players to make a free-throw, sparked the Men in Black, who led 25-22 at halftime. Father Michael A. DeAscanis, associate pastor of St. Ursula, also contributed with solid play.

The announcer, Father Matthew T. Buening, associate pastor of St. John the Evangelist, Columbia, kept the crowd laughing with his glib commentary throughout the game. Father Salvatore J. Livigni, who provides pastoral care for retired priests, was a favorite target; Father Buening introduced him “as having played with Jesus.” But what Father Livigni lacked in wheels, he made up for in game sense. Monsignor James P. Farmer from St. Ursula was another favorite target; his buckets caused Father Buening to declare “he doubled the record for monsignor points.”

A slam-dunk contest featuring local high school basketball stars entertained the crowd during half-time; Henry Sims from Mount St. Joseph High School, Irvington, won. Father Gerard Francik, director of the archdiocesan Office of Vocations, presented him with the prize and jokingly placed a Roman collar on his neck to recruit him for the Men in Black.

The parish team came out strong in the second half, but “the postman” Father J. Collin Poston, associate pastor of Church of the Resurrection, Ellicott City, scored to put the Men in Black back on top.

Sister Kathleen, playing for the youth team, was sent sprawling after a collision in the second half; fortunately the only thing broken was her glasses.

Father Bolger fired a long pass to Father Nolan, who scored despite being fouled, to open the lead to 43-30. But the parish team answered with a three-pointer. A free-throw and a basket by Mr. York made it 44-38 with just four minutes left. With just 1:57 left, the parish team threatened, closing the gap to 45-42, but Father Nolan scored with 1:32 left. Mr. York scored again, as did a younger player, for an exciting 49-46, but with just 17 second on the clock Father Bolger put it away with a bucket, and the Men in Black prevailed, 51-46.