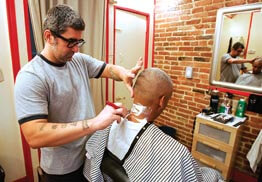 As Ed Ruane of Charles Village settled into a cushioned swivel chair at the Beatnik Barbershop in Mount Vernon, he instructed the barber to trim the sides, shape the top and clean his neck.

“I’m pretty low maintenance, compared to a lot of guys my age,” said Mr. Ruane, 23, who attends Mass at Holy Rosary, Fells Point, and other Baltimore City Catholic parishes. “I used to use gel, but I’ve stopped that for the most part.”

Though women tend to have more elaborate work done to their hair when they visit the salon, men usually have theirs cut more frequently and aren’t shy about telling the professionals with the shears how they want to look, said Peter Barbones, 39, the Catholic proprietor of the Beatnik Barbershop on Read Street.

“On average, most men get their hair cut once a month,” Mr. Barbones said. “You have your once-a-week guys, but they are pretty rare.”

The upshot is men want to be well groomed. Spending time, effort and money maintaining and styling their hair doesn’t challenge their masculinity, he said.

“About 60 percent of the men who come in here are project oriented when it comes to their hair,” Mr. Barbones said. “They are trying to grow it out, or they are looking to have it shortened, or they’re experimenting with a different look.”

With a customer age range predominantly between 20 and 40 – 99 percent of whom are men – the Beatnik Barbershop clients often ask for recommendations on hair products such as pomage and sculpting lotion, he said.

“It’s funny, the urban guys tend to go for the pomage because it’s not so heavy and it has a more natural, run-your-fingers-through-your-hair look,” Mr. Barbones said, “and the suburban guys tend to go more for gel.”
The younger guys also tend to have longer hairstyles, while men 30 and older usually ask for a close-cropped cut, he said.

As for the comb-over, most men realize that long strand of hair covering their bald spot doesn’t fool anyone, Mr. Barbones said.

“We do have one guy who won’t give up his comb-over,” he said with a laugh. “Most guys stress they want to make sure they don’t even have the appearance of a comb-over.”