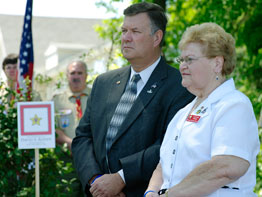 The Boy Scouts of America paid special tribute to U.S. Navy Petty Officer David Roddy, who sacrificed his life in Iraq, as well as 89 other military members, both living and dead, in a May 25 ceremony in an honor garden outside Patterson Mill Middle/High School in Bel Air.

The event, which was attended by some 150 individuals, was organized by Troop 810 of St. Francis de Sales, Abingdon, and the Ronald J. Engle Memorial Scout Foundation.

Petty Officer Roddy, who lost his life in Iraq Sept. 16, 2006 while attempting to defuse a bomb, was an active parishioner of St. Francis de Sales and an Eagle Scout for Troop 877, St. Stephen, Bradshaw.

Mr. Craig presented the Roddy family with a proclamation acknowledging May 25, 2008, as “David S. Roddy Day.”

“He’s an American hero who has not been forgotten,” said Carol Roddy, Petty Officer Roddy’s mother and president of the Gold Star Mothers of Maryland, the local chapter of mothers whose children gave their lives serving their country. “I’m just honored that they chose him.”

She said her son, a husband and father of three, was not one for much attention and called him “humbled.”

“He knew he had a job to do, and he did it,” Mrs. Roddy said. “He didn’t care if people said thank you. He knew in his own self-satisfaction that he got it done.”

Robert Roddy Jr., Petty Officer Roddy’s father, explained that a few weeks before his son’s death, he turned down an offer to go home as the result of a friend’s death in Iraq.

“He said he had a mission to do,” Mr. Roddy said in an address to the audience at the tribute.

Troop 810 Eagle Scout Brad Mascari, 17, said his family is close with the Roddy family. “It means a lot that I can actually take part in this because I do know a lot of the families. It’s nice that I can be a part of this for them.”

“Part of the Scouting code is respect for our country,” he said. “It’s our duty to do this as much as it comes from our hearts.” Ryan Parks, 15, played “Taps” on the bugle. His father, Kevin Parks, Troop 810 assistant Scout master, called the event “an opportunity for the boys to understand what sacrifice is all about,” a point driven home to his family with horrible suddenness later that night.

Mr. Parks said the day turned “surreal” for his family when they were informed that the day’s casualties in Afghanistan included David Leimbach, a cousin in the U.S. Army Reserves whose name had been spoken during the tribute to those fighting overseas.

“To have David’s name read as part of the program, and then to get this news that same night, needless to say, our house is really quiet,” Mr. Parks said. “That just brings home the purpose of the event.”