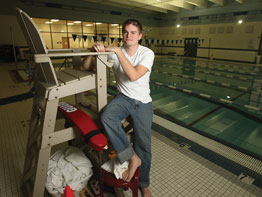 When Cort Meinelschmidt swam for the Hagerstown YMCA in the mid-1990s, his coach took no mercy on him.

The man with the whistle was Cort’s older brother, Erik – a proud sibling who wanted to see his little brother achieve his best in the water.

“He was a lot more critical and harder on me,” remembered Cort, who began swimming practically at the same time he learned to walk. “He was very big, so he could torture me. He’d say, ‘Stop crying, there’s enough water in the pool already.’ ”

There was more to Erik Meinelschmidt than a hard-driving taskmaster.

Cort recalls his nurturing side, which Erik put to good use at St. Maria Goretti High School in Hagerstown. In just three years, Erik turned around the school’s swim program and built it up from seven members to 39 today.

The popular coach died suddenly May 30, at age 36.

Cort Meinelschmidt has helped fill the void created by that loss, stepping up to take over a program that now boasts its biggest squad in eight years.

In a season dedicated to Erik, St. Maria Goretti was unbeaten through meets as of Dec. 19. The emotional highlights have included school records from Cassidy Lippert in the 100-meter breaststroke and Tammy Bereznay in the 500-meter freestyle.

“Our kids feel that Erik is behind them, pushing them in the pool,” said Carol Brashears, St. Maria Goretti’s athletic director. “He really cared a lot for the kids; he had a warmth about him and a huge heart. He was very much a part of their lives.”

Ms. Brashears noted that Erik was particularly devoted to his younger brother Kirk, who became a paraplegic after developing spinal meningitis at age 5.

“He helped take care of his brother,” she said. “He helped lift him.”

Cort Meinelschmidt, the Gaels’ new coach, said he took over the program with mixed emotions. He was excited to continue his brother’s legacy, but it was difficult, knowing that Erik is gone.

“He was more than a coach to these kids,” said 30-year-old Cort, remembering that his brother went to proms and other school functions. “Swimming was his passion. He wanted to see them get faster and really enjoy the sport.”

Cort credited his team’s success to his brother’s hard work.

“This is the team Erik would have dreamed about,” he said. “The freshmen are real good. The girls are doing great.”

Cort, Erik, Kirk and their sister, Wendy, were raised in a family devoted to swimming. Their mother, Karen, served as the aquatics director of the YMCA for several decades, and the siblings enjoyed a home pool.

“That’s what we did,” said Cort, a former nationally ranked swimmer. “We swam.”