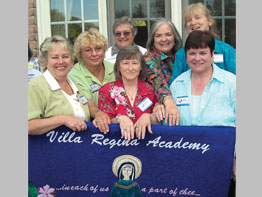 Some of them hadn’t sung their school song in half a century, but as soon as a few sopranos led the way, 115 graduates of Villa Regina Academy in Baltimore flooded a Fallston home with a joyful rendition of the tune Sept. 20.

“As we go onward,” the women sang with gusto, many of them slipping into old harmonies they memorized as teens, “there will be in each of us, a part of thee.”

At the closing notes, some women wiped away tears. Then the entire group broke out into a cheer.

The Sept. 19-21 reunion, sponsored by Mega Millions winner Bernadette Gietka, was the first time many of the graduates had seen each other in decades, and brought back memories of their long-closed school. Villa Regina Academy was a high school boarding school for girls aspiring to become School Sisters of Notre Dame. In operation for 10 years, the last class graduated in 1968.

Current School Sisters of Notre Dame were among those who attended the reunion, along with many women from across the country who left the religious community and others who completed the aspirancy program but did not become religious sisters.

“When we were at Villa Regina, we were trained to care about other people and to focus on spiritual things rather than all the commercial things,” remembered Ms. Gietka, a 1967 graduate of the academy and a parishioner of Holy Rosary in Fells Point who won $183 million in the Mega Millions lottery.

Because they had never received class rings, Ms. Gietka purchased rings for each attendee. The weekend included dinner at Friendly Farms in Upperco, a visit to a dinner theater, a party at one of Ms. Gietka’s homes and a Mass celebrated by Bishop William C. Newman at the School Sisters’ motherhouse in Towson.

“We all wanted to help people,” said Ms. Gietka, noting that her classmates were “bonded” in song and prayer.

Jacki Bush Stout, a member of the class of 1966 who now lives in Phoenix, Ariz. and Washington state, remembered Villa Regina Academy as a place where students treated each other like family. They attended Mass each day, lived in dormitories, studied together and put on musicals and plays, she said.

Ms. Stout, who became a postulant after graduating but left the religious order after six months, remembered after a senior class play how she and five of her friends visited a neighboring house and climbed into the attic.

“We sat on a widow walk and looked out over the city,” she said. “We were like sisters. It was so wonderful. I remember wishing that moment could go on forever.”

Though some of the women said it was difficult when many sisters left the order in the 1960s and 1970s, they said the training they received helped the wider church and community.

“It’s wonderful to hear that so many have found ways to incorporate ministry in their lives even though they left,” said Sister J.B. Schammel, S.S.N.D., a Villa Regina alumna who now works at the Caroline Center and Learning Career Center in Baltimore.