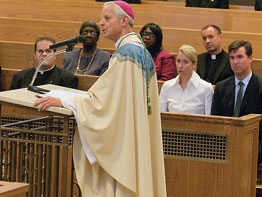 Sulpicians from across the East Coast converged on St. Mary’s Seminary and University in Roland Park Sept. 19 to celebrate the 400th birthday of Father Jean-Jacques Olier, a French priest who founded the Society of St. Sulpice and is credited with developing the modern seminary education system.

The entire seminarian and faculty community of Theological College of the Catholic University of America and St. Mary’s Seminary and University attended the celebration, along with Sulpicians from throughout the region.

In his homily, Archbishop Donald Wuerl of Washington said one of Father Olier’s lasting legacies is his understanding of the spirituality of diocesan priesthood.

“He was conscious it was rooted in ministry to God’s people,” said Archbishop Wuerl.

Father Thomas Hurst, S.S., president-rector of St. Mary’s Seminary and University, read a letter from Archbishop Edwin F. O’Brien that described Father Olier as “a priest deeply committed to forming priests after the heart of Christ.” The Baltimore archbishop praised Father Olier’s vision of renewal of the church through the renewal of the priesthood.

Sulpicians are the only priests in the world with the sole responsibility of educating fellow priests. They operate seminaries and continuing formation programs on five continents, including St. Mary’s Seminary and University, which opened in 1791 as the first Catholic seminary in the United States.