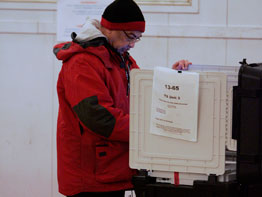 WASHINGTON – All the punditry about religion in this year’s presidential election seems to be about evangelical Republicans.

It was only four years ago that pundits were consumed with the political leanings of Catholics. Would they back Democratic Sen. John Kerry of Massachusetts, the first Catholic major-party nominee since John F. Kennedy? Would the election outcome be affected by the statements of some bishops who said Kerry’s support for keeping abortion legal meant he should be denied Communion, and a few who suggested Catholics should not vote for him?

But in this year’s lively primary election season, there has been little attention to Catholics as a voting bloc – at least not in the mainstream news media. There are, however, some trends apparent in how Catholics are voting.

According to exit polling, Sen. Hillary Clinton of New York has been getting a majority of the votes of Catholics in nearly every Democratic primary, no matter who won. Only in Louisiana and Georgia did Sen. Barack Obama of Illinois get more votes from Catholics than Clinton did. In his home state of Illinois, which he won with 65 percent of the vote, Obama took only 48 percent of the votes of Catholics, to Clinton’s 50 percent.

Even in states such as Maryland, where Obama took 60 percent of the vote, Clinton was supported by a majority of Catholic Democrats.

In Wisconsin, according to a CNN Democratic exit poll, Clinton and Obama just about split the overall Catholic vote, 50 percent and 48 percent, respectively.

Among Republicans, McCain has been a favorite with Catholics since the beginning, but Romney also did better in counties where the Catholic population is high.

Pollster John Zogby argues that there really isn’t a “Catholic vote” in the sense of an identifiable bloc that votes on the basis of shared religious beliefs. Nevertheless he sees patterns in why some Catholics are voting in certain ways this primary season.

While Clinton also has done well among Hispanic Catholics in most states, the Catholic majorities that she has enjoyed and who have supported McCain over his Republican rivals come primarily from older voters, he told Catholic News Service.

In Clinton’s case, Zogby said he thinks those are what pollsters classify as “white ethnics,” or people whose parents or perhaps grandparents were immigrants and who feel strong ties to their family’s ethnic heritage.

For one thing, this segment of voters was happy with the presidency of Bill Clinton and tends to have favorable views of the senator for that reason, he added.

“White ethnics also skew older,” he said. “They may have concerns about a younger candidate and maybe a little about electing an African-American.”

The same demographic slice of Catholics among Republicans likely supports McCain for the same issues related to the Arizona senator’s age and experience, as well as his military veteran status, suggested Zogby.

“McCain has done very well with Catholics right from the beginning,” he said.

John Green, a senior fellow in religion and American politics at the Pew Forum on Religion and Public Life and a political science professor at the University of Akron in Ohio, sees not one but several segments of a “Catholic vote” in typical American politics.

What he describes as an ethnic segment of Catholics is made up primarily of Hispanics and other recent immigrants or first-generation Americans, he said. Especially when they are new to the United States, they overwhelmingly favor Democrats.

“As they become assimilated and move up the economic ladder they become more Republican,” he noted.

– Those who are very conservative Republicans, frequent Massgoers who hold more traditional views of the church.

– Political liberals who vote Democratic and who also hold more liberal views about the church and may be less likely to attend Mass weekly.

– Political centrists who may vote either Republican or Democratic and who are neither traditionalist nor particularly modernist about their religion. He believes they are the largest segment, perhaps as much as 40 percent or 50 percent of white Catholic voters.

Green said those centrist Catholics are the true swing voters, whose electoral choices are one of the most powerful predictors of how a presidential election will go.

“Those are the folks who see both sides of the issues,” he said.

This year, they’re also very much “in motion,” according to Green, and that fact is not lost on candidates in either party.

While media attention has focused on the role of evangelicals in the Republican race, Green said both Democrats and Republicans have been working hard at outreach to Catholic voters and other faith groups.

Alexia Kelley, executive director of Catholics in Alliance for the Common Good, said issues of concern to people of faith have been much more front and center in this year’s political debate than in recent elections.

Providing health care, addressing poverty, protecting workers rights and generally working to protect the common good – all components of the Catholic Church’s social justice teachings – are themes that have been heard from candidates of both parties, Kelley said.

The language of the candidates, including references to the “common good,” indicates at least an awareness of its importance to “Gospel voters,” Kelley told CNS. Her goal is to see that the verbal outreach to people of faith is more than just words.

“We have work to do to make sure that ‘common good’ is not just a buzz word,” she said, “that it’s not superficial interest, pandering to us.”