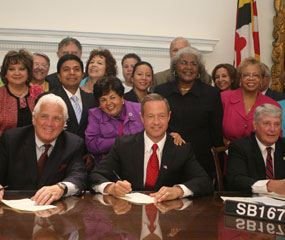 Editor’s Note: The Maryland Catholic Conference, which represents all three dioceses with territory in the state – the Archdiocese of Baltimore, the Archdiocese of Washington, and the Diocese of Wilmington – issued the following statement May 10, after the signing of SB 167/HB 470.

The Catholic Church has long advocated for legislation which the Maryland General Assembly finally passed this year to provide in-state college tuition to Maryland’s immigrant children. Today’s bill signing should be celebrated by all who recognize this measure as a just, practical, and humane way to allow these young men and women to continue their education, and to join their Maryland classmates in maximizing their God-given talents.

We are therefore strongly opposed to efforts to close the door on this opportunity by petitioning the bill to a statewide referendum. A statewide referendum on the issue of immigration will have a needlessly divisive impact on our state, and we urge Catholics and all Marylanders to refrain from signing on to this petition effort.

We do not condone breaking the law, and fully recognize the legitimate concerns our state and country faces regarding illegal immigration. These problems cannot be solved, however, by harshly denying the needs of those who live and work among us here and now, especially the young. The in-state tuition bill is a balanced measure that benefits immigrant children mostly brought here through no fault of their own, and who are making the right choices in order to lead productive lives.

These immigrant students will not take seats from other Maryland resident students who are U.S. citizens, but rather must apply at first to community colleges, which have open enrollments. After two years students are then eligible – if they qualify academically – to apply to state universities at the in-state tuition rate. If they are accepted, their seats may not be counted among the seats the University of Maryland system is required to reserve for resident students. They are not eligible to receive scholarship assistance. They must provide documentation that they or their parents have and will continue to pay income taxes.

Blessed Pope John Paul II, whose beatification was joyfully celebrated last week throughout the world, reminded us in a Message for World Migration Day entitled, Undocumented Immigrants, “Solidarity means taking responsibility for those in trouble. For Christians, the migrant is not merely an individual to be respected in accordance with the norms established by law, but a person whose presence challenges them and whose needs become an obligation for their responsibility.”

In solidarity with immigrant children, we pray that in-state-tuition bill will soon give them the chance to realize their future dreams, and that the people of Maryland will refuse to lend their names to efforts to stifle those dreams.