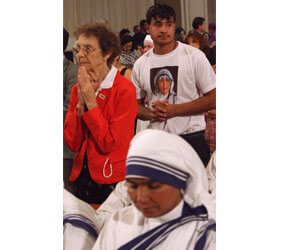 WASHINGTON – More than 3,000 people packed the Basilica of the National Shrine of the Immaculate Conception Sept. 5 to mark the 13th anniversary of the death of Blessed Teresa of Calcutta, attend a memorial Mass and witness the unveiling of a commemorative stamp in honor of the nun.

Archbishop Pietro Sambi, apostolic nuncio to the United States, was the principal celebrant of the memorial Mass in the upper church that preceded the U.S. Postal Service’s unveiling of its commemorative stamp in honor of the centennial of Mother Teresa’s birth.

He also praised her for “her passion in defense of life. She said the greatest disease is not being wanted and the greatest destroyer of peace is abortion.”

Among others attending the Mass were Mother Teresa stamp artist Thomas Blackshear II; Postmaster General John Potter; Sister Mary Leticia, provincial superior of the Missionaries of Charity order founded by Mother Teresa; and many members of the order.

“This (Mother Teresa) stamp looks almost like a holy card. I pray it may serve in some small way as a reminder of Mother Teresa,” Archbishop Sambi said. “May Jesus stamp upon our hearts the same spirit as Mother’s to love God, the church and the poorest of the poor more than ourselves.”

In his dedication of the stamp, Potter said stamps act as “a nation’s ‘calling cards’ because they reach a national, and even an international, audience.”

“They focus attention on subjects our country regards with respect and affection, and that is certainly true of Mother Teresa, who believed so deeply in the innate worth and dignity of humankind and worked tirelessly on behalf of the poor, sick, orphaned and dying,” Potter said. “That’s why today I am so very proud that our country, after making her an honorary citizen in 1996, is honoring Mother Teresa with such a lasting memorial.”

James Gaffney, who brought his wife and children from Plainsboro, N.J., said his family had planned their visit to Washington to coincide with the celebration at the shrine.

“We came (to Washington) to show the kids our nation’s capital,” Gaffney said. By attending the Sept. 5 Mass and ceremony, he said, “we also wanted them to know about a saint who lived during their lifetime.” The amateur stamp collector also admitted that he was seeking to purchase first day of issue commemorative items.

Lucy Rossi, a U.S. Postal Service employee who was working at the shrine, said that “the lines have been crazy all day. We’ve really been busy.”

It was estimated that the U.S. Postal Service sold about 30,000 stamps at the Mother Teresa stamp unveiling at the national shrine.

Victor Martin, a stamp enthusiast, said he waited more than 45 minutes to purchase his first day of issue items.

“I’m not Catholic, but I always did like Mother Teresa,” he said in explaining his interest in the stamps. Martin noted that he and his wife, Cathy, would stay for the Mass. “We won’t know what we’re doing (at the Mass), but it will be interesting to see (Mother Teresa) honored.”

Jim Towey – former director of the White House Office of Faith-Based and Community Initiatives under President George W. Bush, who served until this past June as president of St. Vincent College in Latrobe, Pa. – was one of the lectors at the Mass.

A longtime friend of Mother Teresa and a regular volunteer at her homes in Calcutta and Washington, Towey called the feast day Mass and stamp unveiling “a happy day.”

“With each year that passes since her death, we are growing to appreciate more and more the gift we were given in Mother,” he said. “And, we continue to appreciate the gifts given to us by her sisters.”

Bishop Knestout, recalling his first meeting with Mother Teresa when he served as priest secretary to the late Cardinal James Hickey, said the saintly nun asked him to pray for her.

“Imagine that, I thought, this holy woman asking me for prayers. It seemed to me that I needed her prayers more,” he said. “It was a simple, ordinary encounter with a humble woman, who only wanted to encourage prayer and to ask for prayer – nothing more.”