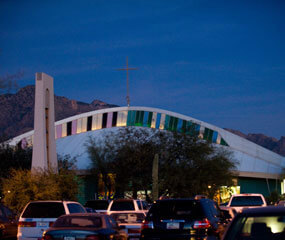 TUCSON, Ariz. – More than 800 people filled St. Odilia Church and its nearby parish hall Jan. 11 to pray for the victims of the shooting spree outside a Tucson supermarket Jan. 8.

Roxanna Green, the mother of slain 9-year-old Christina Taylor Green, a member of the parish, looked on as Tucson Bishop Gerald F. Kicanas spoke at a special Mass to heal the community, remember those who died and console the victims and their families.

President Barack Obama and members of his Cabinet and Congress were expected to attend a much larger memorial service the following day at the University of Arizona’s basketball arena, McKale Center.

But the St. Odilia Mass, televised locally, was the first of the formal religious services to memorialize the victims.

Many of the people who attended were St. Odilia’s parishioners, but others had no connection to the church. Law enforcement officers, many in civilian clothes, could be seen throughout the congregation.

The opening song, “Amazing Grace,” was led by the parish children’s choir, of which Christina was an enthusiastic member.

“The memory of that Saturday morning will haunt all of us for a long time,” Bishop Kicanas said in his homily. “May it also prod us to treasure each moment with loved ones, to find ways to work together, despite our differences, to enhance our community.

“May it also move us to commit our efforts to rid our communities of violence and all that causes and encourages it,” the bishop said.

Citing the “many thoughtful, kind, supportive words from people all over the world,” Bishop Kicanas said many recognize “how this community in Tucson has pulled together so beautifully to face the tragedy that struck so unexpectedly.”

The bishop said “we are grateful for the world’s concern, their solidarity, and their love.

“Everyone takes pride in the bravery of Tucsonans subduing the suspect, the first responders who instantly reacted to assist those hurt, and the medical staff at University Medical Center.”

Half a dozen priests and several deacons participated in the liturgy. United Methodist Bishop Minerva Carcano of Phoenix spoke at the end of the Mass. She had hosted an ecumenical prayer service at Catalina United Methodist Church earlier that day which Bishop Kicanas attended.

Twenty people were shot, six fatally. The most critically wounded survivor was Democratic U.S. Rep. Gabrielle Giffords. She was holding a meeting with constituents when she was apparently targeted by the gunman.

The suspect, Jared Lee Loughner, 22, was tackled and subdued by people at the scene after firing 31 shots and attempting to reload his Glock 9 mm handgun, Tucson police said.

Among the dead was U.S. District Judge John M. Roll, who had attended Mass at St. Thomas the Apostle Church just before stopping by to speak with Giffords, a longtime friend.

“How could God allow such violence to be done to the innocent? How could God permit the pain and suffering felt by so many good people? Has God abandoned us? Has God looked the other way?” he asked.

“Our all-good God never wills evil, never inflicts harm, never injures or hurts,” the bishop said. “Rather our gracious God comforts and consoles us when such tragedies strike. … Our God stands by us, walks with us, holds us in the palm of his hand.”

“(God) knows Christina, John, Gabe, Dorwin, Phyllis and Dorothy by name. They are God’s sons and daughters, beloved in God’s eyes. He receives them and welcomes them home.”

Besides the judge and young Christina, the others killed were: Gabriel Zimmerman, 30, who was Giffords’ community outreach director, and three retirees: Phyllis Schneck, 79, Dorwin Stoddard, 76, and Dorothy Morris, 76.

Referring to the injured, the bishop said God “loves and cares for each of them. He wills their full recovery.”

Bishop Kicanas said that God “wills not discord, not division, not destructive words or actions. Rather God desires that we be worthy of being called His sons and daughters by how we act and relate to one another. We are to resist evil, to live with integrity, to speak with civility and respect.”