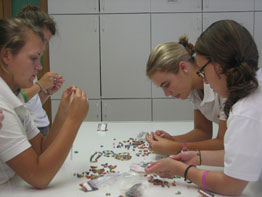 Inspired by the movie “Invisible Children,” students from Maryvale Preparatory School in Brooklandville worked to increase awareness of the plight of children in Uganda by organizing a Social Awareness Week, April 22-27.

Designed to draw attention to the plight of orphans and children in Northern Uganda who have been kidnapped by the Lord’s Resistance Army and forced into militant service, the awareness week illustrated how the children are often physically, sexually and mentally abused – only to become abusers themselves – adding to the cycle of violence.

• April 22 – In an effort to convey to the student body the trauma and fear involved in the displacement of the Ugandan children, 18 students were abruptly taken from their classes, forced to wear black T-shirts that read “invisible,” and told not to speak for the rest of the day. The goal of the activity was to inspire the students of Maryvale to become socially aware, take action and gain empathy for the Ugandan children. Students gathered at the end of the day for a presentation on Invisible Children and learned how their classmates felt about the experience of being displaced.

• April 24 – Nora Collins of Catholic Relief Services addressed the student body and helped students gain a better understanding of the plight of the Invisible Children.

• April 27 – Maryvale students participated in the Displace Me Rally from 1 p.m. to 5 p.m. at McKeldon Square. The rally was coordinated by the Archdiocesan Youth Council and incorporated Ugandan dancers and storytellers.