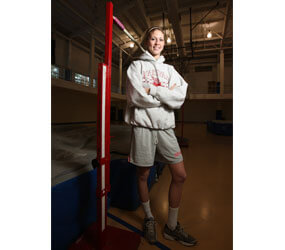 Lacey Shuman soars where few girls in Maryland have ever gone.

Her accomplishments are all the more impressive, considering that the Maryvale Prep senior does so despite not having an on-campus facility on which to practice her craft, nor a weight room in which to strengthen the lift that is a trademark of high-jumpers of her caliber.

At two different indoor track and field meets in December, Shuman cleared 5 feet, 10 inches. According to www.milesplit.us, which compiles national high school rankings, as of Jan. 7 she was one of only two girls in the United States to have cleared that height this indoor season.

Records compiled by the Interscholastic Athletic Association of Maryland and the state’s public schools association show that only one girl in state history has ever gone as high or higher in a championship meet, and that occurred outdoors, in 1989.

Shuman stands 6 feet tall, but she didn’t try track and field until her sophomore year and seems a bit befuddled by her success.

Her height has something to do with it, as do a keen work ethic and her willingness to try just about anything. A parishioner of Shrine of the Sacred Heart in Mount Washington, Shuman recounted how her mother, Susan, registered her for nearly every organized youth activity imaginable.

As a track and field novice, Shuman set an IAAM record with a 5-7 clearance at the 2008 indoor championships.

“We didn’t know how special she was,” said Maryvale coach Jason Miller.

Her last two summers included high jump camps at Princeton and Shippensburg, and her video library has some of the world’s best high-jumpers in international meets.

Shuman also benefits from competing in one of the nation’s premier facilities, the Prince George’s Sports and Learning Complex in Landover. It’s where both of her 5-10 clearances occurred, and where she will be Jan. 15, when the facility is the site of the IAAM and Maryland Interscholastic Athletic Association championship meets.

Shuman is committed to clearing 6-feet before her high school career is over. Carrying a solid B-average in the classroom, she is being recruited by the University of Maryland, Notre Dame University, the University of Virginia and colleges in the Big Ten Conference.

Shuman’s dream job would be working for National Geographic magazine. She said that “I love writing,” and that she has always enjoyed her history classes.

That combination makes sense, as she writes her own history.