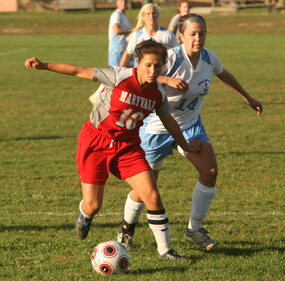 Colin Devlin makes the same pledge to all his varsity soccer players at Maryvale Preparatory School in Brooklandville: if they make their college soccer team, he’ll be at their first game to watch them play.

Devlin has no doubt that in two years, he’ll need to make some travel plans to see Gabrielle Tana’s first collegiate game. The 16-year-old Maryvale junior is a “pure talent” and “hard worker” who is already attracting attention across the country, Devlin said.

“It’s a God-given talent this kid has,” Devlin said. “You just have to admire it.”

In her freshman year, when Maryvale won the Interscholastic Athletic Association of Maryland B Conference Championship, Gabrielle scored 9 goals and assisted on 12.

Last year, when the team moved up to the more competitive A Conference, she had 10 goals and 14 assists. Halfway through September, the central midfielder already scored three goals and had one assist.

“I love making the assist as much as making the goal,” said Gabrielle, a parishioner of St. John the Evangelist in Hydes who is still considering her college options. “I love creating the passes and making it happen.”

Gabrielle began playing soccer as a girl and was coached by her father with the Baltimore Soccer Club.

“My dad pushed me and challenged me,” said Gabrielle, who has also played for four years on the Olympic Development Team. “I owe a lot to him for that.”

Gabrielle’s Maryvale coach said the midfielder is excellent at multitasking on the field. As one of the captains, he said, she leads by example.

“She brings the same intensity to every game,” Devlin said. “The kid never changes. She is the first one on the field and the last to leave.”

“I don’t settle for average,” she said.