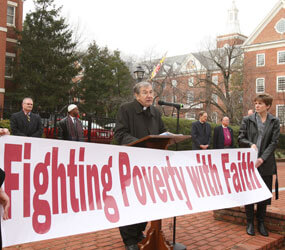 ANNAPOLIS – At a time of impending budget cuts, leaders of Maryland’s faith community came together outside the State House in Annapolis Dec. 15 to speak up for the poor and vulnerable.

Representatives of a variety of Christian, Jewish and Muslim groups prayed for those in need and implored lawmakers to protect programs that benefit the poor.

“Maryland is the wealthiest state in the nation,” said Auxiliary Bishop Denis J. Madden, “yet 440,000 of our neighbors live in poverty and many more struggle to make ends meet.”

Bishop Madden said many Marylanders are turning to the state and other human service providers to help meet their most basic needs for food and shelter. He noted that after 11 years of steady decline, the number of welfare recipients has increased by 20 percent in the past year.

Food stamp enrollees in Maryland have reached a record high of 527,000 – up 44 percent since 2007. The Temporary Disability Assistance Program has also seen a 30 percent increase in recipients in the past year, he said.

“The state’s safety net is at a breaking point,” Bishop Madden warned.

William McCarthy, executive director of Catholic Charities in Baltimore, said there is a strong tradition of people of different faiths fighting poverty. Catholic Charities traces its roots to 1792 when Archbishop John Carroll declared that one-third of all parish revenues should go to the relief of the poor.

Other faith groups are performing similar service, he said. McCarthy noted that in fiscal year 2009, the Jewish Community Services disbursed more than $1.1 million to help meet basic needs such as food, shelter and utilities – a 48 percent increase over disbursements during the same period two years ago. Interfaith Works of Maryland received three times as many emergency assistance calls this year over last, he said, and visits to its clothing center increased 43 percent.

“It is in the context of our faiths that we are expanding services to respond to increased demand while the rest of the economy contracts,” McCarthy said.

Bishop John L. Rabb of the Episcopal Diocese of Maryland called on state leaders “to remember to weigh the human impact of state programs just as much as their fiscal impact.”

Imam Earl El-Amin of the Muslim Community Cultural Center of Baltimore thanked lawmakers for what they have already done to protect the poor and vulnerable.

“When the decline in Maryland’s revenues began, you were careful not to choose Maryland’s social services programs as the first to suffer cuts,” he said. “We thank you for continuing to protect these most important programs to the best of your abilities.”

The prayer vigil, which attracted about 70 people, was organized by the Maryland Interfaith Legislative Committee. Bishop H. Gerard Knoche of the Evangelical Lutheran Church offered the opening prayer, and Rabbi Ari Goldstein of Temple Beth Shalom in Arnold gave the closing prayer.