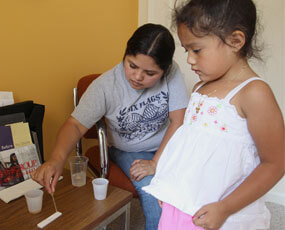 SILVER SPRING, Md. – As director of a Catholic pregnancy center in Maryland, Mariana Vera feels a strong personal commitment to the young, mostly Hispanic women who are its clients.

That’s what has compelled her to fight a county regulation requiring the posting of a notice that, in effect, tells the women to go elsewhere for pregnancy advice.

“We decided to be a leader in this new battlefield,” said Vera, director of Centro Tepeyac Women’s Center in Silver Spring, of the lawsuit filed in federal court against a Montgomery County regulation that forces the county’s four pregnancy centers – but not abortion clinics – to post a sign recommending that any woman who is or could be pregnant consult a licensed health care provider.

“The government cannot create certain speech rules just because people want to talk about pregnancy choices,” said Mark Rienzi, a law professor at the Columbus School of Law at The Catholic University of America and lead counsel in the center’s lawsuit against the regulation.

“And it certainly cannot target pro-life speakers for special sign requirements and fines while leaving speech by abortion clinics entirely unregulated,” he added in comments when the suit was filed in May. “This new regulation violates every core principle of free speech law.”

The center, named for the site where Our Lady of Guadalupe appeared to St. Juan Diego and marking its 20th anniversary this year, provides free pregnancy tests, confidential counseling, referral services, parenting and other classes for both mothers and fathers, post-abortion counseling and material assistance for new mothers, such as baby clothes, diapers and car seats.

Vera and her staff of four – most of whom are bilingual – field 12 to 20 phone calls a month from “abortion-minded” women and have face-to-face counseling sessions with six to eight of them.

The staff’s goal is to give women “the life-affirming tools so they can choose freely” whether to have an abortion, parent the child or allow him or her to be adopted, Vera said. “And we tell them, whatever you choose, you can come back. Our doors are open.”

The important thing, Vera said, is for the women to “feel they are safe” and for counselors to listen as they talk about how a pregnancy might impact their hopes and dreams.

They need to know that despite the pregnancy, “I can still achieve my goals,” she said. “It is not the end of the road.”

As they recount the problems they face – the lack of a job or proper housing, abandonment by a boyfriend or husband, the lack of immigration papers or just a generalized fear and anxiety about the future – counselors work to “give them the tools” to take small steps toward solving their problems and to realize that abortion is no solution, Vera said. “Getting rid of the baby is not going to solve their problems.”

Isabel Sacasa, 23, has been working at the center for nearly a year. After she graduated from college, she was looking for a volunteer opportunity “where I could really help Latinos” but found she was mostly offered jobs where she would be translating documents instead of working with people.

After she met the center’s former director at a pro-life breakfast, she signed on as a full-time volunteer. Her duties there include interacting with clients and their children, translating as needed, organizing the baby supplies donated from a variety of sources, and just doing whatever needs to be done.

Vera said women who come to Centro Tepeyac receive “the truth about abortion.”

“We don’t have to get into the medical stuff about abortion,” she said, adding that counselors focus on the emotional, spiritual and physical consequences that they have seen in clients who return for post-abortion counseling.

The argument for the Montgomery County regulation was that pregnancy centers such as Centro Tepeyac establish “a doctor-patient relationship” with clients and become in effect “fake clinics,” Vera said. But when the council was debating the proposal, the vast majority of those who testified – including Tepeyac clients – opposed the regulation, while no one came forward to say she or he had been harmed or misled by a pregnancy center, she said.

The center could be subject to fines of more than $20,000 a month if it failed to comply with the regulation.

In addition to helping pregnant women and those in need of post-abortion healing, Centro Tepeyac has started a program called “Girls Talk: Live in Purpose” for women who come to the center for a pregnancy test and get negative results. The 10-week program helps the young women “take ownership of their relationships,” according to coordinator Jelannia Sutton, by “encouraging and empowering them to make life-affirming choices.”

Because all of its programs are free and the center receives no government funding, one of the biggest problems facing Centro Tepeyac is the constant need for donations.

“We do amazing things with what we have,” Vera said. “We use every penny and every dollar.”

But she looks forward to a time when Centro Tepeyac can move to “the next step” and become a medical clinic offering sonograms, Pap tests, testing for sexually transmitted diseases and other services.

“Then we’d be saving 20 babies a month or more,” Vera said with a smile.