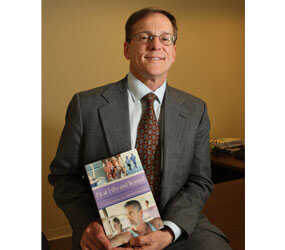 Ever since he was a hospital orderly at the age of 19, Dr. F. Michael Gloth III has been intrigued with the senior population.

Assigned to a unit of the hospital devoted to patients 70 and older, Dr. Gloth often wound up chatting with the seniors in the wee hours of the morning.

“They were just a wealth of knowledge and experience and wisdom, and they were so respectful,” said Dr. Gloth, a Maryland native and parishioner of Sacred Heart in Glyndon. “I thought, well, if I could ever be a physician, I’d really like to take care of that population.”

Dr. Gloth did go on to attend Wayne State University School of Medicine, where he took every course on aging he could. He completed his residency at Union Memorial Hospital in Baltimore and a fellowship in geriatric medicine and gerontology at Johns Hopkins.

Today, the 53-year-old husband and father of four daughters, who has also served on the National Advisory Council on Aging to the National Institutes of Health, hopes to help the older population through his book, “Fit at Fifty and Beyond.”

In the book, written with master chef Rudolph Speckamp, Dr. Gloth applies principles he has learned to “let people understand that if they do things properly, losing weight doesn’t have to be as hard as it is.”

Speckamp, who was trained in his native Germany and whose culinary accomplishments have won him 26 national and international gold medals, incorporates healthy recipes such as turkey with tomato basil sauce, broccolini with orange–sesame sauce and Spanish potato omelet.

“Exercise can help in terms of conditioning and in terms of weight loss if you do it properly,” Dr. Gloth said. “So what I’ve done is given people what I think is a smarter way to diet and exercise so that they optimize the benefits they get from the effort they put into it.”

The doctor said that when an individual exercises is important, as well as when they eat and what they eat.

“All those make a difference in terms of strength, muscle mass, conditioning, all of which become even more important as individuals become older,” he said. “So giving them the guidance to do this in a more intelligent fashion also gives them an opportunity to be more successful at reaching their goals.”

Dr. Gloth, who is an associate professor of medicine and the director of outpatient services at Johns Hopkins University School of Medicine, applies the principles to his own life, exercising at home, running with his father and eating well.

The book includes pictures of individuals from their 50s to their 80s incorporating Dr. Gloth’s exercise tips.

“What I want them to do is become more healthy and more fit, and therefore have a better quality of life and a better functional survival,” he said. “Everybody talks about living until you die, but with this, I’m talking about living life until you die – being functional and active till you die.”

The book is available through Borders, Barnes and Noble, Amazon and other sources. Dr. Gloth will also be speaking at the second annual symposium for Catholic medical professionals March 6 from 1-4:30 p.m. at St. Agnes Hospital in Baltimore. RSVP by Feb. 26, at 410-707-9842, johanna.coughlin@archbalt.org.