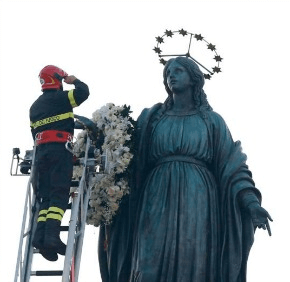 VATICAN CITY – Although she was just a humble young woman from a small town, Mary’s total “yes” to God was “the most important ‘yes’ of history” and overturned Adam and Eve’s prideful “no,” which unleashed sin into the world, Pope Francis said.
“With generosity and trust like Mary, may each of us say this personal ‘yes’ to God today,” Pope Francis prayed Dec. 8 as he recited the Angelus prayer with visitors in St. Peter’s Square on the feast of the Immaculate Conception.
Even when they do not say “no” to God, human beings can be experts in saying, “yes, but …” to God, the pope said.
“To avoid saying ‘no’ outright to God, we say, ‘Sorry, but I can’t,’ ‘Not today, but maybe tomorrow,’ ‘Tomorrow I will be better, tomorrow I will pray, I’ll do good tomorrow,’” he said. But in responding that way, “we close the door to what is good and evil profits.”
Nevertheless, Pope Francis said, God keeps trying to reach out and save us. And through the “yes” of Mary, he became human, “exactly like us except for one thing, that ‘no,’ that sin. This is why he chose Mary, the only creature without sin, immaculate.”
In the late afternoon, the pope made his traditional visit to a statue of Mary erected in the center of Rome, near the Spanish Steps, to celebrate the official church recognition that Mary was conceived without sin.
Thousands of Romans and tourists crowded around the statue where people had been laying flowers all day. Early Dec. 8, Rome firefighters with a truck and ladder hung a wreath of white flowers from the outstretched arms of the statue.
Pope Francis composed a prayer to Mary for the occasion and read it, standing under the statue’s watchful eyes.
He offered special prayers for children who have been abandoned and are exposed to exploitation, for all families who give life and contribute to society, often in hidden ways, and especially for those who are underemployed or unemployed.
“We need your immaculate gaze,” he told Mary, in order to “rediscover the ability to look at people and things with respect and recognition and without selfish interests and hypocrisy.”
“We need your immaculate heart to love unconditionally, without any aim besides the good of the other, with simplicity and sincerity, renouncing masks and ploys,” he said.
“We need your immaculate hands to caress with tenderness, to touch the flesh of Jesus in our brothers and sisters who are poor, sick, despised, to help up those who have fallen and steady those who waver.”
“We need your immaculate feet to set out to meet those who cannot take the first step, to walk along the paths of those who are lost, to go and find those who are alone,” he prayed.