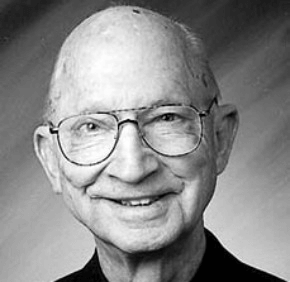 Father Casimir M. Peterson, a priest who attracted international attention for using detective skills in uncovering a long-forgotten Marian crown of jewels, died Dec. 4. He was 95.

While working as the director of the Reparation Society of the Immaculate Heart of Mary in 1996, Father Peterson discovered a mysterious key to a safe-deposit box. The key had been stored by Anna Pertsch, the former president of the society, who had died that year.

According to an Aug. 21, 1996, article in the Catholic Review, Father Peterson searched through a maze of banks until finally locating the elusive box along a seedy Baltimore strip known as “The Block.” After paying past-due rental fees, the priest inserted the key inside the box to discover a wooden chest containing a 14-carat gold crown encrusted with diamonds, emeralds, sapphires, amethyst and turquoise stones.

With June Sensinger, a Towson gemologist, Father Casimir Peterson discusses the details of a Marian crown of gold he uncovered in 1996. (CR File)

The Reparation Society commissioned the crown in the 1940s for a statue of Our Lady of Fatima in Baltimore, asking people around the world to donate gems to decorate it. Father Peterson told the Catholic Review that Pertsch and society leaders had likely stashed the crown away in the late 1960s during the Baltimore riots.

“When I opened the chest for the first time, alone in the vault, I whispered to myself with a headying sense of awe, ‘Our Blessed Mother wants her crown back,’” Father Peterson told the Catholic Review, noting that the crown was discovered during the 50th anniversary of the society and the universal observance of the Queenship of Mary.

Had the priest acted only a few days later, the crown would have likely been lost since the bank was planning to drill the box open because of delinquent rental fees.

“He said, ‘Mother, my Polish personality is saying I’m not going to do it,” Monsignor Farmer remembered with a laugh.

Born in Baltimore to Joseph and Bernice Pruchniewski, who later Anglicized their name, Father Peterson was baptized at St. Casimir in Canton. He was inspired to become a priest after serving as an altar boy and through the encouragement of the religious sisters who taught him at Our Lady of Pompei School in Highlandtown.

Father Peterson prepared for the priesthood at St. Charles College and St. Mary’s Seminary in Baltimore.

Ordained for the Sulpicians in 1947 at the Basilica of the National Shrine of the Assumption of the Blessed Virgin Mary, Father Peterson spent the initial years of his priesthood educating seminarians at St. Mary’s Seminary in Baltimore, St. Joseph’s College in Mountain View, Calif., St. Charles College in Baltimore and St. Edward’s Seminary in Seattle.

He left the Sulpicians in 1956 to help care for his father, and began ministering for the Archdiocese of Baltimore.

From 1965 to 1968, Father Peterson worked as vice-officialis in the Metropolitan Tribunal. He was pastor of St. Lawrence in Jessup from 1968 to 1971, then served as pastor of Holy Family in Randallstown for four years. With the permission of Archbishop William D. Borders, he was chaplain to St. Elizabeth’s Hospital in Washington, D.C., from 1975 to 1988, when he retired.

In his retirement, Father Peterson was moderator of the Reparation Society and spiritual director of the World Apostolate of Fatima.

Monsignor Farmer remembered his friend as a highly intellectual man who had a doctorate in canon law.

“He liked things to be done precisely during the liturgy,” Monsignor Farmer said, recalling his boyhood days as an altar server with Father Peterson. “He insisted that we do everything properly and he had a great understanding of church history. He had an encyclopedic knowledge of church matters.”

Monsignor Farmer recalled that Father Peterson also had a whimsical side. During an altar server swimming outing to the Eastern Shore, Father Peterson carried a large black box and asked the boys to meet him by a pier at a certain time. When the youths arrived, they found the priest standing in the water – challenging them to a swimming race.

But Father Peterson easily won the sprint. The boys later looked inside the priest’s box to discover a pair of flippers, Monsignor Farmer said.

In a 2007 interview with the Catholic Review on his 60th jubilee as a priest, Father Peterson said the highlight of his priesthood was serving patients with mental illness at St. Elizabeth’s Hospital. He remembered one schizophrenic patient who had refused to eat or drink for weeks and ultimately had to be force fed. Knowing the patient was Catholic, the Review reported, his psychiatrists asked Father Peterson to talk with him. After a few hours, the priest convinced the man to start eating again.

“I was able to reach him in a way no one else could,” Father Peterson told the Review. “It was the salvation of his life. That was a wonderful high point of my priesthood.”

Monsignor Arthur Bastress, pastor of the National Shrine of St. Alphonsus Liguori in Baltimore, said Father Peterson was a great friend of the shrine and celebrated Tridentine Masses there.

“He was very committed to the Tridentine Mass,” Monsignor Bastress said. “He was a very prayerful man.”

A Tridentine Latin Requiem Mass will be offered for Father Peterson Dec. 9 at 11 a.m. at St. Alphonsus.