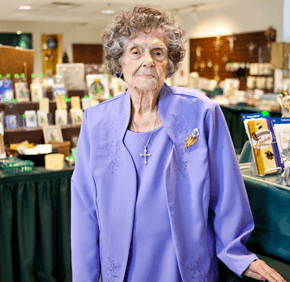 By Elizabeth Lowe
elowe@CatholicReview.org
Mary J. Portera is counting down the days until she becomes a centenarian.
“Thirty-eight days until I’m 100,” said Portera with pride while she visited St. Jude Shrine, her longtime parish, May 28.
Portera, a lifelong Baltimore resident who will celebrate her 100th birthday July 5, said her life has centered around the Catholic Church, and the Baltimore City shrine in particular.
She received her first Communion there and was confirmed there, although at that time, it was St. John the Baptist parish.
A homemaker, she has spent thousands of hours in the span of almost a century volunteering at the shrine.
“I came here in 1923 and I haven’t left,” she said. “It is my church until I die.”
Portera was married to husband, Carmen, for 65 years. He died in 2000.
The couple produced four children, who gave them five grandchildren, 10 great-grandchildren and one great-great-grandchild.
Through it all, she served her church, dusting, scrubbing the marble altars, changing the melted candles, cooking dinners for priests and helping to raise funds. She helped start bus trips to the shrine and helped found the shrine’s gift shop, after World War II ended.

“It started in a china closet,” Portera said. “It had rosaries and a couple prayer books.”
The gift shop moved to its current location, in the shrine’s lower level, nearly 20 years ago, said Portera, a spry woman who continues to work there.
The large shop sells prayer cards, religious medals and seasonal offerings with Advent and Christmas items. Portera said popular items include anything to do with St. Jude, angels and statues of Mary.
Portera, who lives nearby, no longer attends daily Mass but prays the rosary daily.
“I call my place the St. Jude annex,” she joked.
She credits her longevity to eating a balanced diet, her love of people, going to bed early and rising early – she gets up at 5 a.m. – and “trying to be good.”
St. Jude Shrine parishioner Wanda Kearse met Portera in 1977 and said it’s because of the soon-to-be centenarian that she is a lector, extraordinary minister of holy Communion and volunteer at the Baltimore parish.
“She is the reason I’m involved at St. Jude,” said Kearse, 61. “When I think about the church, I think about Mary Portera.”
She praised Portera’s sharp memory.
“She remembers everything,” she said. “She knows birthdates, addresses. Her mind is just amazing.”
Mary Berman, a fellow parishioner and volunteer, described Portera as frank.
“She speaks her mind, loud and clear,” Berman said. “If it’s the truth, she says it.”
Berman said Portera is an “icon of the church.”
“To me she is the church,” she said. “I can’t imagine this church without her.”