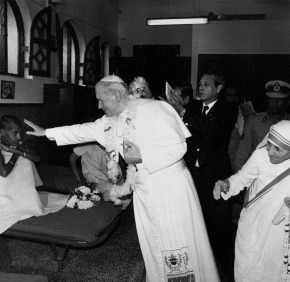 By Maria Wiering
mwiering@CatholicReview.org
The photo showed an elderly man, dead, lying on a cot, a flower garland resting on his body. In Kolkata, India, Susan Conroy had loved and cared for him, and had comforted him as he died.
Blessed Teresa of Kolkata had shown her how.
During a June 8 symposium for Catholic medical professionals in Baltimore, Conroy, 49, shared her story with photos from a summer working with Mother Teresa at her Home for the Dying and orphanage.
About 130 doctors, nurses and other health care workers attended the afternoon symposium at MedStar Good Samaritan Hospital. It was organized by the Archdiocese of Baltimore with the support of four other Baltimore-area Catholic hospitals: Bon Secours Health System, Mercy Medical Center, St. Agnes Hospital and University of Maryland St. Joseph Medical Center.
Its theme was “Reflecting Christ while Healing the Wounded: Faith, Hope and Love.”
In a changing health care landscape, patients’ human dignity is a constant, Baltimore Archbishop William E. Lori said in his opening remarks. Catholic health care providers’ responsibility “is that every life in your hands is valued and protected,” he added.
In an hour-long presentation, Conroy, a native of Maine and EWTN series host, said Mother Teresa taught that the only way to be happy is to learn to serve. Conroy wrote about her experience in “Mother Teresa’s Lessons of Love and Secrets of Sanctity,” published by Our Sunday Visitor in 2003.
Beginning with her trip to India, Conroy knew Mother Teresa for 11 years.
She described heading to Kolkata as an idealistic rising college senior, despite warnings from Indian acquaintances that it would be too dangerous for a 21-year-old woman to travel alone. She called the journey a “leap of faith,” and urged attendees to rediscover the “youthful idealism” that decreases fear.
“Mother Teresa welcomed anyone with ‘hands to serve and a heart to love’ to help,” Conroy said, repeating the beatified sister’s mantra.
Cheerfulness, joy and a sense of humor were also necessary, she said.
“The spiritual gifts we brought were more important than the medical care,” Conroy said. “Our spiritual life is the greatest gift we can give to anyone.”
She spent her mornings with the children at the Missionaries of Charity’s orphanage and afternoons at the Home for the Dying, where the Missionaries and their volunteers brought men and women dying on the streets of Kolkata. Most of the dying were in India’s lowest social caste, the “untouchables.”
Mother Teresa served Jesus “in his distressing disguise of the poor,” said Conroy, who added that Mother Teresa was motivated by love and sustained by prayer, and that scores of young medical students and nurses volunteered with her to learn how to work with compassion.
“When someone is dying, medicine doesn’t help, but love does,” Conroy said.
The “living saint” would urge people who wanted to leave their homes to serve with her in India to stay put and find the suffering and lonely in their own communities.
“God isn’t calling us to do huge things on this planet,” Conroy said. “He is definitely calling us to do small things with great love.”
The symposium also featured a panel that addressed a range of issues facing Catholic medical professionals, from the meaning of authentic Catholic care to the privilege of caring for the sick and dying. Speakers included Dr. John Bruchalski, founder of Tepeyac Family Center in Fairfax, Va.; Dominican Father Albert Duggan, Johns Hopkins Medicine chaplain; and Daniel Blomberg, legal counsel for the Becket Fund for Religious Liberty in Washington, D.C.
Also see:
Pope tells presidents only God can bring peace to the Holy Land
Some pass on gym, get exercise at church
Gerry Sandusky on Alzheimer’s
PrevNext