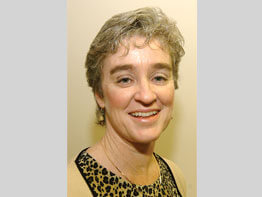 As Mary Ellen Russell prepares to take over leadership of the Maryland Catholic Conference in Annapolis, the longtime legislative lobbyist said that expanding the group’s communication efforts and continuing the legacy of her predecessor will be at the top of her agenda.

Ms. Russell, a 50-year-old parishioner of St. Mary in Annapolis, was named the new executive director of the Catholic Conference by Maryland-serving bishops. She succeeds Richard J. Dowling, who is retiring this year.

“We want to aggressively recruit every Catholic to join that network,” she said. “The more we can be sophisticated in the way we make our voice heard, the more effective we can be in bolstering the important voice of the Church in the public square.”

The conference represents the state’s Catholic bishops in the state capital, speaking on a wide range of issues related to the sanctity of life, education, social justice and other concerns.

Ms. Russell is no stranger to the Catholic conference, focusing on education and family issues for 11 years in two stints, from 1995-2000 and 2002-present.

Ms. Russell was also instrumental in the founding of the Maryland Nonpublic Schools Legislative Coalition, the State Superintendent’s Nonpublic Schools Workgroup and the Mid-Atlantic Catholic Schools Consortium. She is a lay consultant to the U.S. Conference of Catholic Bishops (USCCB) Committee on Catholic Education.

Ms. Russell said she was grateful for Mr. Dowling’s strong leadership at the conference. The outgoing executive director was her much-respected friend and mentor, she said.

“In every sense, I have some very large shoes to fill,” she said. “As with any other challenge, I approach it with a lot of prayer and I ask for a lot of prayer.”

While the bishops are “saddened” about Mr. Dowling’s retirement, Archbishop Edwin F. O’Brien said they are “thrilled to have someone equally respected and known throughout Annapolis as Mary Ellen Russell.”

“She has skillfully and successfully advanced the mission of our Catholic schools in Annapolis for many years and has earned the praise and respect of legislators and others along the way,” said Archbishop O’Brien, chairman of the conference’s board of governors.

Asked about the conference’s legislative agenda in the coming years, Ms. Russell said she is “very optimistic” the conference will find success in passing legislation that will support students attending nonpublic schools. There has been much progress in the move to outlaw the death penalty, she said. She was also optimistic about helping families in poverty, protecting the traditional definition of marriage as being between a man and a woman and “finding common ground” on life issues.

“Finding support for women in crisis pregnancies is a really critical area where all parties ought to be able to come together,” she said.

Ms. Russell received her bachelor’s degree from Boston College and her master’s degree from St. John’s College in Annapolis. She was previously the associate secretary for parental advocacy at the U.S. Conference of Catholic Bishops, a high school teacher, a parish religious education coordinator, and an editorial assistant at a Catholic newspaper.

“Under her tutelage, the only direction the conference can take in the coming years is up,” said Mr. Dowling, “and it will move upward at high speed, I have no doubt.”

A new deputy director for education and family life will be hired to fill Ms. Russell’s current position when she assumes her new duties. No date has been set for the transfer of leadership.