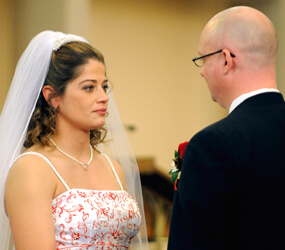 WASHINGTON – Hoping to reverse what they call “a disturbing trend” toward viewing marriage as “a mostly private matter” with personal satisfaction as its only goal, the U.S. Catholic bishops will debate and vote on a 57-page pastoral letter on marriage at their Nov. 16-19 meeting in Baltimore.

The letter, called “Marriage: Life and Love in the Divine Plan,” is another component in the bishops’ National Pastoral Initiative for Marriage, which began in November 2004.

“The vision of married life and love that we have presented in this pastoral letter is meant to be a foundation and reference point for the many works of evangelization, catechesis, pastoral care, education and advocacy carried on in our dioceses, parishes, schools, agencies, movements and programs,” says the document’s closing section, called a “commitment to ministry.”

The letter cites four “fundamental challenges to the nature and purpose of marriage” – contraception, same-sex unions, easy divorce and cohabitation.

Calling both contraception and cohabitation “intrinsically evil,” the bishops say that although couples who use contraception “may think that they are doing nothing harmful to their marriages,” they are in reality causing many negative consequences, both personal and societal.

The document encourages the use of natural family planning, which the bishops say promotes “an attitude of respect and wonder … and fosters the true intimacy that only such respect can bring.”

The bishops, who also were to consider a separate document on reproductive technologies during their fall general assembly, say technology such as in vitro fertilization and cloning can degrade human life by making it “something produced or manufactured in various ways.”

“Children begin to seem less and less as gifts received in a personal communion of self-giving, and increasingly as a lifestyle choice, a commodity to which all consumers are entitled,” the draft says.

Children can be similarly harmed by cohabitation and divorce, the bishops say, citing “the findings of the social sciences … that the best environment for raising children is a stable home provided by the marriage of their parents.”

“Marriage is not merely a private institution,” the letter adds. “It is the foundation for the family, where children learn the values and virtues that will make good Christians as well as good citizens.”

The bishops acknowledge that divorce “may be the only solution to a morally unacceptable situation,” such as when “the safety of a spouse and children is at risk,” and pledge their support and assistance to those in such situations.

They encourage “those for whom divorce seemed the only recourse” to make frequent use of the sacraments, especially penance and the Eucharist. Even Catholics who have remarried civilly after a divorce should “participate in parish life and attend the Sunday Eucharist, even though they cannot ordinarily receive holy Communion,” they say.

The moves to legally recognize same-sex unions pose “a multifaceted threat to the very fabric of society, striking at the source from which society and culture come and which they are meant to serve,” the bishops say.

“Such recognition affects all people, married and nonmarried: not only at the fundamental levels of the good of the spouses, the good of children, the intrinsic dignity of every human person and the common good, but also at the levels of education, cultural imagination and influence, and religious freedom,” they add.

Some of the strongest statements in the document are directed against those who live together without marriage.

“To have sexual intercourse outside the covenant of marriage is gravely immoral because it communicates physically the gift of oneself to another when, at the same time, one is not willing or able to make a total and permanent commitment,” the draft says.

Cohabitation does not improve the likelihood that a couple will have a stable marriage and can even diminish the possibility, it adds.

The bishops said they addressed the letter “first and foremost to the Catholic faithful in the United States” but also offered it to others “in the hope of inspiring them to embrace this teaching.”

“Today, more than ever, people are asking whether and how it is possible to make and keep a lifetime commitment in a marriage,” said Archbishop Joseph E. Kurtz of Louisville, Ky., chairman of the bishops’ Ad Hoc Committee on Defense of Marriage, in a news release about the draft document.

“The Catholic Church has a vision for marriage that can sustain spouses in good times and in bad times – one that can lead them to happiness and holiness in their relationship,” he added. “This message is based on both reason and faith; it is God’s plan for the good of the spouses, their children and family, and society as a whole.”

Richard McCord, executive director of the bishops’ Secretariat of Laity, Marriage, Family Life and Youth, said in the same release that the pastoral letter “will be the launch for several new projects that will offer resources for local pastoral ministries.”

“We also plan to continue developing what has already been successful, especially a public service media campaign on the good effects of marriage as well as our popular Web site, www.foryourmarriage.org, that provides an abundance of practical materials for engaged and married couples,” McCord added.