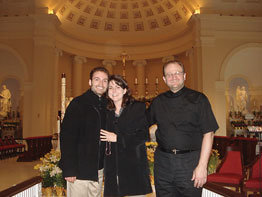 Almost every groom at the start of a Baltimore Basilica wedding chokes up and tears up as his bride walks down the aisle in the striking setting on Cathedral Street.

The enormous front doors open wide, the bride is there, and “it looks idyllic,” said Father Jeffrey S. Dauses, rector of the Basilica of the National Shrine of the Assumption of the Blessed Virgin Mary, Baltimore.

Some couples choose the basilica for their wedding venue because they are familiar with its grand history. Others select it because they feel a strong family connection – maybe their grandparents were married there. For some, its beauty and aesthetic appeal are sufficient.

But be assured brides and grooms are choosing the basilica, which has seen a dramatic increase of weddings since the restoration ended in 2006. Fifty-four weddings were celebrated there in 2007; SUZANNE CHECKING the same number in 2008. Already on the books are 22 wedding for 2009 and one for 2010.

By comparison, Father Dauses officiated 10-20 weddings a year when he was pastor of St. Francis Xavier in Hunt Valley.

“I knew there would be a lot,” he said when he stepped into the rector’s position in March following Monsignor James V. Hobbs’ retirement. “They’re all great celebrations.”

He officiates at one wedding per weekend and depends on visiting priests to handle the remainder.

“It’s a full-time job just keeping up with brides,” he said, most of whom are not parishioners.

Not only are Steve Prinzivalli and Britta Williams planning to marry in the basilica Nov. 1, they became engaged in the church as well. Mr. Prinzivalli, a broadcast meteorologist, knew it was his fiancé’s favorite place to celebrate Mass, “so I wanted this special church to be the place for our nuptial Mass. From the moment I first walked in on the Solemnity of Mary January 1, I was truly blown away by its splendor, beauty, architecture, and holiness. It has to be the most beautiful Catholic Church I’ve ever seen.”

Hearing how it would be “next to impossible” to secure a date in the near future, the groom-to-be thought at the very least he could propose inside the basilica to Ms. Williams, a parishioner at St. Agnes, Catonsville. On Divine Mercy Sunday following Mass, the couple prayed the Divine Mercy Chaplet before the altar and he popped the big question in Latvian.

“Britta had no idea what I was saying,” said Mr. Prinzivalli of his partial-Latvian fiancé, “but it became much clearer when I got down on one knee and opened a box with a diamond ring.”

The proposal was topped off with a blessing by Father Dauses, a bouquet of flowers from a deacon, and a rendition of “Here Comes the Bride” by the organist.

The couple will marry on All Saint’s Day, “the perfect date for us since Britta and I often make sacrifices with the motto, ‘let’s strive to be saints,’” said Mr. Prinzivalli, 32. “That’s our goal for marriage.”

As a “visual person” and an art teacher at Woodmont Academy, Cooksville, Ms. Williams, 27, said she was attracted to the notion of marrying in the basilica because “the idea of ‘beauty’ in light of our faith has always been an important part of my spiritual journey. Choosing one of the most beautiful churches in the Baltimore area seemed like the natural choice. From the moment I stepped into the renovated basilica, I felt so ushered into prayer! There is a sense of fullness and warmth in the walls now, something that calls me to stillness, something that makes me feel part of something so much bigger.”

The weddings which please Father Dauses the most, he said, are the ones involving couples strongly connected to their Catholic faith. When wedding plans and marriage preparation include a spiritual aspect, “it makes a difference.”

When couples marry in the church for other reasons, like to appease their parents, “those (weddings) can be difficult. There’s no real level of commitment on the part of the couple.”

Before she was married in the basilica in May, Katherine Mudunuri, 27, took the tour three times. After the renovation, she had attended a Mass with friends on a holy day of obligation. The next Sunday, she brought along her fiancé, Shashi Mudunuri, who is Hindu.

“Of course the basilica is breathtaking,” she said, “but it was he who said we must get married there!” They secured the date a year in advance and she described the ceremony as “beautiful, elegant, and memorable. Father Jeff had us write why we wanted to marry each other, and then read these words as his sermon. The entire ceremony was touching.”