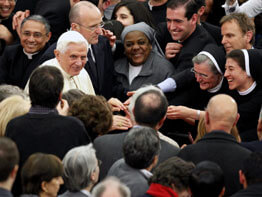 VATICAN CITY – The smallest nation in the world is celebrating a relatively young 80th birthday this year.

Although the Catholic Church has a 2,000-year history, Vatican City State was established Feb. 11, 1929, to guarantee that the Holy See and the pope could freely carry out their spiritual mission of confirming Christians in the faith and guiding the universal church.

The transition from the Papal States to nationhood was a long and bumpy road.

Starting in the eighth century, the church wielded temporal power over what was known as the Papal States, a shifting group of territories across parts of modern-day Italy.

The popes at the time were territorial sovereigns and, as such, had to deal with the unpleasant risks and worries of foreign powers bent on invasion, rival Roman emperors and powerful Roman families vying for control of the papacy.

In the 19th century, revolutionaries fought against papal control in their struggle to unify Italy and the Papal States dissolved in 1870 after Rome and the surrounding territories were annexed to a unified country covering the entire peninsula.

A dispute with the Italian government over the sovereignty of the Holy See kept popes confined inside the walls of the Vatican from 1870 to 1929.

The dispute, which became known as the Roman Question, did not seem to have a quick and easy answer.

On the one hand, Italy had legitimate aspirations “to finally achieve its own state unity and, among other things, to designate as its capital Rome, which had been its point of reference for millennia,” said a front-page article in the Vatican newspaper, L’Osservatore Romano, Feb. 11.

But on the other hand, it said, Rome was the see of Peter and his successors. The Holy See legitimately needed a formal and effective guarantee of its independence and freedom, “which are absolutely necessary for the pontiff in order to carry out his spiritual mission on a universal level,” the paper said.

No pope wanted to compromise his task as shepherd of the universal church by being under the control and authority of a sovereign leader.

Years of negotiations under Pope Pius XI finally resulted in a resolution. Vatican officials and Italy’s Prime Minister Benito Mussolini signed the Lateran Pacts of 1929 in which the Vatican and the Italian state recognized each other as sovereign nations.

Pope Pius, who is considered the founder of the new nation, now had an enormous, nonspiritual task before him: planning and building all the infrastructure that would be needed for the smooth functioning of an independent state on 109 acres of land.

How Vatican City State was built up nearly from scratch is at the center of a new exhibit open in the Braccio di Carlo Magno hall in St. Peter’s Square until May 10.

With wall-sized photographic displays and original artifacts from that period, the exhibit aims to send the visitor back in time to witness the birth of a unique nation.

Old maps show how, behind St. Peter’s Basilica, acres of vineyards and vegetable gardens that had supplied homegrown goods to the pope and Vatican seminaries were razed to make way for the building of a governor’s office.

The administrative office would come to coordinate the functions of some 20 agencies today, including the Vatican Museums and the offices responsible for security, personnel and building maintenance throughout the territory.

The governor’s office continues to oversee all the new buildings that were erected under Pope Pius’ direction, including the Vatican’s railway station, electrical generating plant and radio.

While building a nation out of hilly fields and gardens may have seemed daunting, the Vatican did receive some technical and material help from Italy and even the United States.

The U.S. Western Electric Company and Bell Telephone Laboratories built and supplied the shortwave radio receiver that was used by the newly founded Vatican Radio.

The receiver still works and is turned on so visitors to the exhibition can hear, amid a lot of static, Vatican Radio programming.

Pope Pius had invited the inventor of the radio, Guglielmo Marconi, to build the radio broadcasting station, which was inaugurated Feb. 12, 1931. The exhibit shows a medium wave antenna, a carbon microphone and other instruments Marconi designed for Vatican Radio.

The U.S. International Telephone and Telegraph Corp., known as ITT, published the Vatican’s first telephone book in 1930 and the church in the United States provided the Vatican with state-of-the-art equipment and technology for setting up its first central telephone exchange that same year.

The church in the United States also provided a gold and silver papal telephone, which is also on display. Made by ITT, the phone was used for decades, from the time of Pope Pius until the end of Pope John XXIII’s pontificate.

A 1931 census report in the exhibit shows 711 people held Vatican citizenship and another 283 noncitizens were resident within its walls, for a total population of 994. The vast majority of citizens and residents were Italians. The second largest group was formed by the Swiss, almost all of whom were members of the Swiss Guard protecting the pope.

The residents included 23 women, many of whom were married to members of the Swiss Guard. The census that year registered the births of five boys and six girls, who, by virtue of being born on Vatican territory, automatically became Vatican citizens.