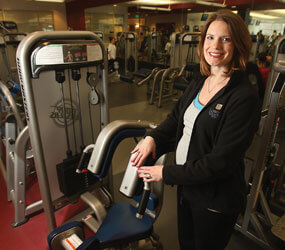 Around the Archdiocese of Baltimore and the nation, people park on the living room couches and at their work desks, following each shot taken in the NCAA college basketball tournament, which was to begin March 17, with the play-in game.

Who will be the bracket-busting underdog or the dominant squad that makes a championship run? It’s hard to get up from a seat in front of the television when there is so much compelling drama available and big money riding on various bracket pools.

How do you break the monotony of the sedentary lifestyle?

“It’s so time consuming,” Ms. Bowman said of the tournament. “(People) think they have to follow every single detail. You don’t have to watch every game. You can’t let it consume you.”

It’s hard, however, not to be compulsive. Ms. Bowman said tournament time is notorious for low work productivity. Banter is exchanged by desk-bound co-workers through e-mail, as scores and statistics create cyber-buzz. Billions of dollars in productivity have been lost.

Countering that trend, according to Ms. Bowman, may be as simple as getting up and walking to another’s desk.

Ms. Bowman recommends transferring passion for college basketball into actual activity. For one, wherever a hoop is available, start your own basketball tournament.

“Depending on how many people you have, you can go one-on-one or have full-team games,” she said. “Make schedules and a bracket like everyone else would do for March Madness and they can contribute a small amount of money to enter, be it a dollar or five.”

Ms. Bowman said avid watchers can research the exercise routines of their favorite athletes and emerging tournament heroes, and incorporate their own regimen.

If a person is determined to stay home, there are plenty of electronic alternatives for fitness, like dusting off treadmill, bicycle or elliptical machine in the basement that currently serves as a place to store old coats.

“Pull out those machines, put it in front of your big screen and walk or ride while you’re watching games,” she said.

Many video games systems, such as the Nintendo Wii, offer interactive, physical play for the user.

Ms. Bowman said the Fitness and Aquatics Center at Loyola will keep its doors open for students, faculty and alumni. She says many gyms will allow members to watch games while they exercise, thanks to screens on equipment and on walls.

Of course, there’s no substitute for being outdoors.

“It’s the start of spring and the weather is getting nicer,” Ms. Bowman said. “Take your kids to the park, use your hoop outside for foul shooting or a game of horse.”

When there is leftover adrenaline, Ms. Bowman said there other positive options.

“Think about volunteering to help a youth or nonprofit team in your community,” she said. “You’re still moving around and it’s good for the soul.”