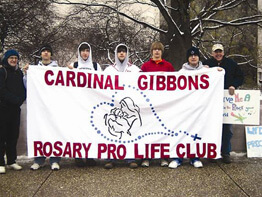 As Michael Hoos stood ready to march on the freezing, winter morning of Jan. 22, he held a sign, made by one of the students at St. Agnes School, Catonsville, which read, “Give me a chance to rock your world.” He said it reminded him of his adopted son, who is learning to play the guitar.

“I tell him to praise God everyday that you weren’t aborted,” said Mr. Hoos, admissions director for The Cardinal Gibbons School, Baltimore.

Mr. Hoos was just one of more than 100,000 people participating in the 34th annual March for Life in Washington D.C. According to Linda Brenegan, director of the archdiocesan respect life office, they estimated the crowd to be about 200,000 last year. In the last five years the youth rally has grown to some 25,000 and they expected to accommodate 30,000 youth in two locations this year. Bishop W. Francis Malooly, western vicar, Bishop Denis J. Madden, urban vicar and Bishop Mitchell T. Rozankski, eastern vicar were at the youth rally at the Verizon Center.

“Added to that number are many additional young people who walk in the March itself,” said Ms. Brenegan. “So the prolife movement is once again young, vibrant and hopeful.”
Among the many young people, Patrick Madden, a junior at Cardinal Gibbons, said he comes to the March because “it’s the right thing to do.”

He said with so many people participating it will send a message to the politicians telling them there needs to be a change here and now.

“It’s important for all people on Capitol Hill to see us and what we stand for,” said the parishioner of St. Bartholomew in Manchester.

Even though the walk itself is only about a mile, “the enormous crowd bears inspiring witness to human dignity and the need to protect the most helpless among us,” said Ms. Brenegan.

As the joyful and upbeat crowd prepared to walk up Constitution Avenue, Elaine Galeone, from St. Joseph, Cockeysville, said the March is important because it calls for action to save the lives of innocent children in this country.

Ms. Brenegan said that the large number of people from all over the country who join together in the March is very encouraging.

“The March for Life takes place in the first month of the year, a time for resolutions,” said Ms. Brenegan. “So the March should serve as a springboard for renewed efforts in education, of ourselves and others, and activity in the public square.”

Peggy Jenkins, a parishioner from St. John, Westminster, has been coming to the March since 1994 and has only missed one since then. Her parish brought two full coach buses and she was surprised to see so many young people from the parish join in the walk.
“It’s comforting to know the young people will take over and there will always be someone to stand up for life,” said the grandmother of seven.

Mrs. Jenkins commented that she was impressed with the turnout even though the weather was damp and cold. She said, “there have been people from all walks of life,” including different ages, races and religions.

“Human life matters at birth and until the end,” said Mrs. Jenkins. “It’s up to God to decide when it ends.”

Like Mrs. Jenkins, Wayne Davis has been coming to the March for about 10 years with his parish of St. Margaret, Bel Air, and the Knights of Columbus. He too recognizes the importance of having so many young people taking a pro-life stance.

“I think it’s (the March) the most important thing I have to do today,” said Mr. Davis. “I hope this gets the attention of those that make the laws especially those in the Supreme Court.”