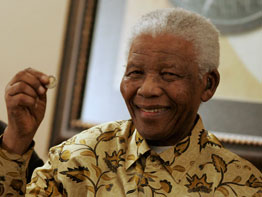 CAPE TOWN, South Africa – South African human rights activist Nelson Mandela was inspired by the Catholic Church’s involvement in social justice concerns during his many years of incarceration, he wrote in a letter from prison to the country’s first black Catholic archbishop.

Mandela, who eventually was freed and elected president in South Africa’s first inclusive poll in 1994, also wrote to Archbishop Stephen Naidoo of Cape Town that he was uplifted by the pastoral care provided by clergy on Robben Island, where he was imprisoned for 18 years.

The content of Mandela’s letter, dated November 1984 was published for the first time in the July 9 issue of The Southern Cross, South Africa’s Catholic weekly, to mark Mandela’s 90th birthday July 18.

Archbishop Naidoo, who under apartheid laws was classified as “Indian,” and Mandela had become friends before his appointment to Cape Town. Then-Auxiliary Bishop Naidoo regularly made pastoral visits to arid and tightly guarded Robben Island, where the former president had been incarcerated from 1964 to 1982.

The neatly handwritten and meticulously phrased letter was headed with Mandela’s prison number: D220/82. It bears an official stamp and signature indicating that it had been passed by the prison censor. In the letter Mandela noted that “in my present situation it will not be possible for me to express myself as I would have liked,” and in closing pointed out that he already had exceeded the permitted length. In a postscript, he added that incoming and outgoing correspondence had a way of disappearing.

Mandela expressed that his friend’s 1984 appointment as archbishop of Cape Town “has pleased me beyond words.”

“The elevation of black personalities to positions of authority in the church is a development which has far wider significance than many people may realize,” he said. “For one thing, it will remove a sensitive problem which has repeatedly rocked South African churches, kept each congregation divided against itself, and generated strong and even violent passions not compatible with the teachings of the Scriptures.”

In a response, dated Dec. 5, 1984, Archbishop Naidoo said he was encouraged by the positive reaction to his appointment.

“It has helped so many to see the (Catholic) Church not as a foreign import, but as ours, rooted in our lives, in our needs, aspirations, sorrows and hopes,” the archbishop wrote. “On the one hand, I am awed by this terrible responsibility, but on the other, I am old enough to know that there is only so much I can do. Need I assure you that I shall do the very best I can, never forgetting my roots in this beloved country of ours.”

Noting that churches have made “many mistakes, some of them very serious,” Mandela said, “it is insufficient to say that those errors have been completely dwarfed by the enormous achievements which have been made, and this is the aspect on which builders and positive thinkers will concentrate.”

In a later address at a Mass in the Cape Town suburb of Athlone Sept. 12, 1993, Mandela singled out other priests who had visited political prisoners on Robben Island, at the Pollsmoor Prison in a Cape Town suburb, and in Pretoria, emphasizing the morale-boosting properties of contact with clergy.

“Archbishop Hurley is often in my thoughts, especially now. I would like him to know that,” Mandela said.

Acknowledging the difficulties of arranging prison visits, Archbishop Naidoo wrote to Mandela: “It would give me great pleasure if I could call on you from time to time. I am not sure whom the initiative has to come from, but may I state here my readiness to visit you whenever possible.”

There are no public records of subsequent meetings between the two men.

Archbishop Naidoo did not live to meet his friend in freedom; he died suddenly at age 51 July 1, 1989, less than eight months before Mandela’s release in February 1990.

After his release, Mandela, a Methodist who reportedly practices his faith discreetly, spoke frequently about the pivotal role of religion in society. At a 1993 Mass in Cape Town during which Mandela controversially received Communion from Archbishop Naidoo’s successor, Archbishop Lawrence Henry of Cape Town, he outlined the Catholic Church’s mandate.

“The Catholic Church in particular has played a very important role in the fight for justice,” Mandela said. “The present pope (John Paul II) is well known for being upfront in this regard. I made the point to meet him when I was in Rome in 1990 and what he said gave us … a great deal of strength and hope.”

Mandela retired from politics in 1999 after one term in office and was succeeded by President Thabo Mbeki.