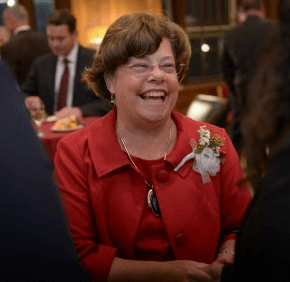 By Paul McMullen
pmcmullen@CatholicReview.org
Twitter: @ReviewMcMullen
During his homily at the annual Red Mass sponsored by the St. Thomas More Society of Maryland Oct. 27, Archbishop William E. Lori spoke of natural law and the imperative to probe our conscience, where God urges us “to do good and avoid evil.”

A few minutes later at St. Mary’s Seminary and University, the Catholic legal community presented its Man for All Seasons Award to a woman who is an exemplar of those ideals.

The Honorable Mary C. Reese has spent more than a decade as an associate judge in the 10th District Court of Maryland. She’s a past president of the St. Thomas More Society of Maryland and the Howard County Bar Association, and has served on the Board of Governors of the Maryland State Bar Association, all while continuing to honor the church and parents who formed her.

Archbishop William E. Lori delivers the homily during the St. Thomas More Society of Maryland Red Mass celebrated at the St. Mary’s Seminary and University chapel in Roland Park Oct. 27. The Solemn Votive Mass of the Holy Spirit is celebrated near the beginning of the judicial year, which include red vestments indicating the fire of the Holy Spirit. (Kevin J. Parks | CR Staff)
A longtime parishioner of Church of the Resurrection in Ellicott City, Reese attended its parish school, was in the class of 1979 at Archbishop Keough High School and graduated cum laude from what was then Mount St. Mary’s College in Emmitsburg, with a double major in political science and English.

She has served on boards at those and other Catholic schools, and currently mentors the pre-law students at Mount St. Mary’s.

“She gives back to all of those schools, and more, all as a volunteer,” said Monsignor James P. Farmer, chaplain of the St. Thomas More Society and the 2013 recipient of the Man for All Seasons Award. “She is a woman of amazing legal ability and moral integrity.”

Judges from across the Archdiocese of Baltimore attend the Red Mass sponsored by the St. Thomas More Society of Maryland Oct. 27. (Kevin J. Parks/CR Staff)
Among others, Reese was accompanied by her brother, Patrick, and her mother, Margaret. Her father, Charles, who died in May 2015, left the seminary to become an attorney and family man. In accepting the honor, however, Reese talked more about the faith-filled example set by her parents than any inspiration he provided to pursue a career in law.

Reese cited “the true and present St. Thomas Mores, people who have suffered tremendously because they hold, and have taken positions, due to their religious beliefs, which are not politically correct.”

She mentioned Daniel Pearl, the Wall Street Journal reporter who was slain because of his Jewish faith; Malala Yousafzai, the Pakistani girl who has challenged Muslim beliefs about education of females; Kim Davis, the Kentucky county clerk who refused to issue marriage licenses to same-sex couples; and the Little Sisters of the Poor, whose fight against the HHS contraceptive mandate has gone to the Supreme Court.

“Each of you,” Reese told her peers, “are being called to be like St. Thomas More.”

She pointed to ethics rules recently adopted by the American Bar Association, which could prohibit lawyers from participating in institutions that do not believe in, for example, same-sex marriage.

The Honorable Mary C. Reese, center, her mother, Margaret Reese, and her brother, Patrick Reese, direct their attention to the Eucharist during the Red Mass celebrated by Archbishop William E. Lori at the St. Mary’s Seminary and University chapel Oct. 27. (Kevin J. Parks | CR Staff)
“In other words,” Reese said, “the pre-law students from Mount St. Mary’s here today, and perhaps each of us practicing law, may be forced to decide, can I practice law or will I have to give up my faith and baptismal vows as a Catholic and Christian, or as a member of the Jewish and Muslim faiths?”

In his homily, Archbishop Lori referenced the presidential campaign, where “rhetoric substitutes for reasoned political speech, and as society splinters on very fundamental questions such as the humanity of the unborn, the worth of the frail elderly and terminally ill, the definition of marriage and the role of the family in society, race relations, the plight of immigrants and refugees … and even the pride of place that the fundamental freedoms of religion and speech should occupy in our culture.”

The Red Mass marks the beginning of the judicial year.

Westminster pastor honored as ‘Man for All Seasons’