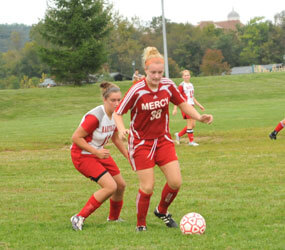 Mercy High School is home to one of the top soccer programs in the country. A key member of those varsity squads is Alexandra Niedoba, who has been a force to be reckoned with on the soccer field since her freshman year.

The Magic senior has been a captain on the team for the past two years and revels in both the individual creativity and the camaraderie that soccer provides.

“I love that it’s a team sport, and I love the team aspect of it,” Niedoba said. “I feel that we can learn from each other. I also like how you can be creative in soccer. You don’t run plays like you do in basketball or football – it’s a player’s sport. You can make your own decisions and develop your own personality as a player. Yet you have to work as a unit, and you need everybody on your team.”

As a midfielder, Niedoba is forced to switch from an offensive mindset to a defensive mindset and vice versa on the fly. Tasked with that responsibility, Niedoba says she tries to get a leg up on her opponents by determining what she’s going to do with the ball before she even gets it.

“I try to think one step ahead of everything,” Niedoba said. “I ask myself, ‘If I get the ball, what am I going to do with it?’ Before I get it, I have to find somebody to play it to. I kind of consider myself the playmaker because I touch the ball a lot. So I’m just trying to decide where the ball’s going to go next.”

Her coach, Doug Pryor, has coached Niedoba since she was 10 years old playing club soccer and has seen her develop into the playmaker that she is today. The soccer team was ranked in the preseason as one of the top 50 teams in the nation by ESPN, and Pryor, the varsity coach for the past two years, is convinced that Niedoba is a huge reason for that.

“She plays at a very high level, she’s just a very good team player,” Pryor said. “This was probably the first time in Mercy’s history that the team is nationally ranked and she has been a big part of that the past four years. She’s a big strong player that controls the game. She’s a very technical player for her size, and she’s very coachable. She plays hard from the beginning to the end of every game even whether we’re winning or losing.”

Niedoba is a member of St. Clare Parish in Essex, and is verbally committed to playing at the University of Louisville in Kentucky, where they will be getting an athletic stud both on the field and in the classroom.

Niedoba has a 3.8 GPA while taking all honors classes. Her course load includes AP Calculus, AP World Literature, AP Psychology and Honors Biology. She is also the vice president of the National Honor Society. She said time management has been crucial to balancing her schoolwork and her extracurricular activities. Her parents even gave her the green light to drop some of her honors classes at one point, but she’s glad she toughed it out.

“It’s very stressful – you have to have really good time management,” she said. “Any free time I have I do homework. I have to get it done on the weekends when I have time. My parents encouraged me to drop some of my honors classes after freshman year, but I told them I knew I could handle it. I’m pretty proud of myself for not doing that. I knew it be better for me with college so I’m glad I made the decision to stay with it.”