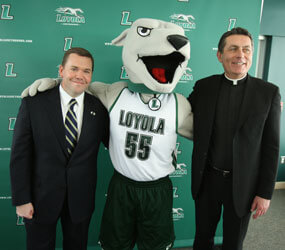 Jim Paquette needed little time to mention the priorities he will espouse at Loyola University Maryland, where he will become assistant vice president and director of athletics April 1.

Paquette will succeed Joe Boylan, the Greyhounds’ athletic director since 1991.

Since 2002, Paquette has been the associate athletic director for development at Boston College, a fellow Jesuit institution. His roots in Catholic education go back further, to his undergraduate days at Providence College, where he met his wife, Erin.

James, 8, and Ryan, 6, were among what their father called “Team Paquette,” family attending the news conference at the Ridley Complex, a 6,000-seat stadium that will celebrate its grand opening March 13, with a 3 p.m. men’s lacrosse game against Duke.

Before introducing Paquette, Father Linnane thanked Boylan for the leadership that allowed Loyola to build that facility – west of the main campus and quite visible from Interstate 83 in the Jones Falls Valley – and the Greyhounds’ success in the Metro Atlantic Athletic Conference.

In order, Paquette said that on his watch Loyola athletics will be true to the Jesuit educational model, and care for the whole person; comply with NCAA rules and regulations, not just the letter of the law but the spirit; uphold financial integrity, “being careful stewards of our precious resources”; and pursue excellence in all sports sponsored by the Greyhounds.