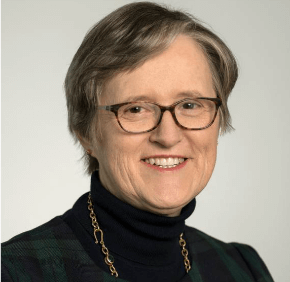 LOUISVILLE, Ky.  – Susan M. Donovan – the first woman to be appointed president of Bellarmine University in Louisville – told students, faculty and staff during a welcoming reception Feb. 22 that she felt “called to lead” the Catholic school.

Donovan will take the helm at Bellarmine July 1. Until then, she will continue as executive vice president of Loyola University Maryland in Baltimore, where she has served in various roles for 32 years.

Donovan told those who packed Frazier Hall on the school’s campus that her appointment at the Catholic university felt like a “homecoming.”

“When I read the university’s mission statement and the presidential profile, it spoke to the core of who I am as a person,” she said. “I’m honored and humbled to serve as the fourth president.”

She told those present that she stands “on the shoulders” of Joseph J. McGowan, Bellarmine’s longest-serving president, who died last March. “I’m awestruck by his vision and consider it a privilege to build on that vision,” she said, drawing applause.

Donovan went on to say that the university was “radical and revolutionary” in its beginning, opening its doors in 1950 to all races.

The leaders of the school saw differences not as “threats, but virtues that shaped the institution,” she said.

“I understand that Bellarmine students continue to speak out against injustices. I applaud them,” she said. “You are the reason Bellarmine exists. You’ve embraced our mission and we hope it inspires you throughout your lifetime. We are committed to your success and inspired by your good works.”

Donovan promised to keep leading the school in that same spirit. “We will not back away from our responsibility to the community,” she said. “This university on the hill will continue to serve.”

“She has, indeed, left her mark on Loyola,” he said, “setting a gold standard for the service and care the university provides to students, deepening Loyola’s commitment to service in and beyond Baltimore, and inspiring our community to engage more fully in essential conversations around racial justice and equity.”

In meeting with news media prior to her speech to Bellarmine, Donovan said Catholic social teaching is the foundation of the university. She believes, she said, that “a few people committed to a purpose can change the world.”

“The mission of Bellarmine beckons us to unite to solve problems, rectify injustices, to advocate for and learn from the needy in our midst and to provide access to education that transforms lives in the city of Louisville, the region and in society at large.”

During her welcoming reception, Donovan also addressed Bellarmine’s staff and faculty, expressing her gratitude and admiration for their work.

“You’ve chosen to commit your life’s work to Bellarmine and its students. You create a sense of home and a safe environment,” she said to the staff.

To faculty members, she said, “I recognize the significance of your work and the distinction you bring to Bellarmine.” The school’s “academic reputation is a credit to your life’s work.”

In her approach to leadership in higher education, Donovan said, she’s collaborative. She believes, she said, that the individuals running the school’s programs know best how to do so. As a result, she believes in “empowering people to do the job they were called to do.”

She also said she plans to be “very accessible and visible” in her new role as president.

“I’m student-centered,” she noted, adding that she appreciates student leadership. Students who are “most engaged” are also “most successful” after school, she said.

Donovan’s husband, Bill, was in the audience as she addressed the school Feb. 22. He is currently an associate professor of Latin American history at Loyola. The couple have twin daughters who are college sophomores.

The newly appointed president noted that faith is an important part of their life and that she and her husband attend Mass on campus regularly. She enjoys walking her dog, and she and her husband enjoy attending college athletic events, the theater and concerts.

She likes what she’s seen of the city of Louisville so far and has even “checked out” some of the eateries, she told reporters during the news conference.