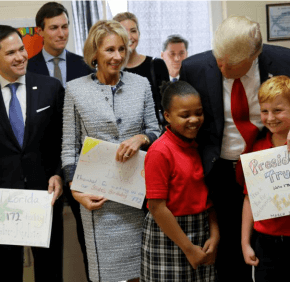 She wanted to make sure he looked his best since he would be presenting his personal education story to the president of the United States.

As daunting a prospect that might be for a teen, truth be told the teacher looked more nervous than 16-year-old Millien, a junior at Bishop Moore High School in Orlando and a graduate of St. Andrew.

Flashing a confident smile, Millien knew what he wanted to say during a roundtable discussion about the Florida Tax Credit Scholarship program to President Donald Trump.

On March 3, the president and other dignitaries toured the predominantly black school in which 70 percent of students benefit from the school choice scholarship program.

Trump was joined by Education Secretary Betsy DeVos, U.S. Sen. Marco Rubio, R-Florida, and Florida Gov. Rick Scott in a tour of the school that started with a visit to a fourth-grade class. The visit, which was private, was dubbed as a listening session.

During a roundtable discussion, the president heard from parents, teachers and students, including Millien.

The son of a single mother who emigrated from Haiti as a refugee to the United States, Millien didn’t use the forum to toot his own horn. Although his family does not have the financial resources for him to attend private school without a scholarship, the teen said he is a fortunate person.

“My mother struggled, but didn’t want me to have to struggle,” Millien said of the reasons his mother chose to put him through Catholic school. “Here at St. Andrew, I found a sense of community and people who cared for me and had my best interests at heart.”

Artayia Wesley, 17, a fellow junior at Bishop Moore, agreed with Millien’s assessment of St. Andrew. She also participated in the roundtable discussion and is a graduate of St. Andrew.

“This community helped us put our best foot forward,” she said. “My father works very hard to provide for our family, but without the scholarship, I wouldn’t have been able to go to St. Andrew. My academics and my behavior (about school) improved while I was here.”

After high school graduation, both teens said they would attend college. Wesley has aspirations in law and possibly politics. Millien hopes to play college basketball while pursuing sports medicine or neurology. No matter what path they pursue, they know their Catholic education will put them on the right path.

U.S. President Donald Trump holds hands with Henry Fortier, superintendent of Catholic schools in the Diocese of Orlando, Fla. and a former associate superintendent in the Baltimore Archdiocese, during a visit to St. Andrew Catholic School in Orlando March 3. Principal Latrina Peters-Gipson sits between them. (CNS photo/Jonathan Ernst, Reuters)

“Always remember who helped you get where you are and who supported you … and continue to offer the values and support they gave you,” Millien said. “Remember you wouldn’t be who you are without they support you had.”

Those words are exactly what brought Stephanie Jean-Jacques to serve as a teacher at St. Andrew School for the past two years. The daughter of Haitian immigrants, she had her share of bumps in the road as she attended West Orange High School in Orlando and the University of South Florida in Tampa. She felt called to serve as the school, in the heart of a lower-income area of Orlando.

“I am a proud Haitian, and I make it my priority to share my history of who I am and where I came from,” Jean-Jacques said, recalling a moment in her first year at St. Andrew when her students were surprised their teacher, a Haitian woman, went to college and found success “It was an important to share that with the children. That, yes, people just like them can succeed.”

She said she witnesses firsthand the benefits of the Florida Tax Credit Scholarship program, which is utilized by so many of her students. But the opportunities don’t stop with the financial funding. As a teacher, she does all she can to support her students and remind them two things: don’t give up and remember where you came from. And the students abide by that understanding.

“I’ve learned these students are driven, lovable. They are dreamers and talented, and they have high hopes for success,” she said. “They truly strive for the goals of college and heaven.”

Those two goals are something that is plastered all over the school, which in 2015 started a partnership with the University of Notre Dame in South Bend, Indiana, to become one of 14 Notre Dame ACE Academies. This partnership is designed to strengthen classroom instruction, enhance student enrollment practices and support optimal operations.

According to Theo Helm, director of communications for ACE, the Alliance for Catholic Education, one aspect that dictates how an academy is chosen is parental choice.

“We are so proud of our partnership with the Orlando Diocese and with this school,” Helm said, adding that three other schools in the nine-county diocese are ACE academies. “It is so important that parents have a right to choose the best education for their child.”

The success of the parental choice program prompted the Orlando Diocese to invite Trump to St. Andrew. With Secret Service on the premises, children had to process through a makeshift, temporary metal detector to get to their classrooms. Orlando Bishop John G. Noonan visited classes in the morning before the president’s 1:30 p.m. arrival. Streets were closed off around the school some time before the visit.

The president’s arrival was marked by an entourage of cars, including two stretch limo SUVs, regular SUVs and vans. A gaggle of some 20 members of the press huddled in the back of Jane Jones’ fourth-grade classroom just before the door opened and Latrina Peters-Gipson, principal, escorted the president inside.

Two of the fourth-graders got up to greet the president and other dignitaries who arrived, including Scott, Rubio and DeVos. The president’s daughter and son-in-law – Ivanka Trump and Jared Kushner — were also on hand.

The president only stayed a few minutes, and shook a couple of students’ hands. He smiled, commented to a few of the girls how beautiful their hair was, and offered all the students the following advice: “You will all succeed because you all work very hard.”

Along with the fourth-grade classroom, the president visited eighth graders before heading to the library for the roundtable discussion. Although the press was not invited to stay for the discussion, there were preliminary words heard while cameras flashed.

Henry Fortier, secretary for education and superintendent of Catholic schools for the Orlando Diocese, said the discussion about school choice was both an exciting and important opportunity.

“I know there is a lot of controversy about school choice, but I see it as a partnership because it’s not a situation of us versus them but of a situation of all of us working to provide opportunities for all parents so they have a right to choose an education appropriate for their children,” he said. “It shouldn’t be just for the wealthy.”

Fortier, a former principal of New All Saints School in Baltimore and a former associate superintendent in the Baltimore Archdiocese, said 25 percent of students attending Catholic school in the diocese benefit from the Florida Tax Credit Scholarship.

Reiterating what he said many times on the campaign trail, Trump said in his remarks that school choice is “the new civil rights issue of our time.”

James Herzog, associate for education for the Florida Conference of Catholic Bishops, also was in on the roundtable discussion, which lasted some 20 minutes. He said he hoped Congress will look to Florida as an example of how school choice vouchers benefit students, families, educators and schools.

“On a state level, we really appreciate the school choice programs because it makes Catholic education possible to low-income families,” he said.

Record number of students rally for school choice in Annapolis