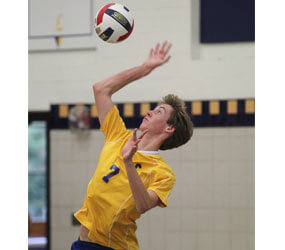 Playing on the Loyola Blakefield volleyball team has become somewhat of a family affair for senior Andrew Stromberg. His older brother Lee Stromberg ’09 was an opposite hitter for the team, and an older cousin also played for the Dons.

“It’s a good team sport with lots of camaraderie,” said the 6-foot-4-inchStromberg, who is an outside hitter for Loyola. “It’s very exciting because as far as points, it can go any way at any time.”

Stromberg’s coach, Tim Baier, said the teen works hard both on and off the court.

“He’s always been very dedicated to the sport, helping out wherever he can,” said Baier. “He’s very coachable – just an all around great kid.”

When he’s not playing volleyball for Loyola, Stromberg, 17, plays the saxophone in the school’s jazz ensemble and concert band.

“Music is enjoyable for me, and with jazz I get to play more interesting pieces,” he said.

He is also president of Loyola’s Spanish Club, a member of the National Honor Society and serves on the liturgy committee, which helps to plan school Masses.

A Cathedral of Mary Our Queen, Homeland, parishioner, Stromberg has been an altar server since the fourth grade and was recently asked to serve as a sacristan.

This past summer, the teen went on a service trip to Bethlehem Farm, a Catholic community in Appalachia, where he learned about green farming and also performed various service projects in the community.

When it comes to working hard on the court, Stromberg said he tries to do the best he can wherever he can.

“Even if I’m not involved in a play, it’s very important in volleyball to have a lot of communication,” he said. “Since it’s a big team sport, it’s still important to have court presence and to work hard to motivate your teammates.”

He said volleyball can be a very mental game, and ‘if someone messes up, the whole team has to be there so they don’t get stuck.”

Stromberg is not yet sure where he’ll attend college, but said he plans on studying biology or going premed.