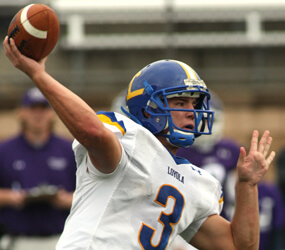 Loyola Blakefield football was looking unstoppable at the beginning of the season.

Building on the momentum of 2008’s perfect 11-0 record, the Dons rolled past their first five opponents – winning each game by a 30-point margin or more. They were the favorites to claim their fourth straight Maryland Interscholastic Athletic Association A Conference title.

Then they met a brick wall.

McDonogh and Gilman crushed the all-boys Towson school in back-to-back games that saw the Dons lose by a combined 77-7 point spread. Loyola’s players admit that the defeats were devastating.

“We like to hit and we were not hitting in those two games,” said Ben Cranston, a 285-pound senior center and a team captain. “We’re not used to losing games, so (after the second loss) we had a really intense week of practice – there was lots of tackling, blocking and those kinds of things. We just focused on fundamentals.”

The hard work paid off as the Dons rebounded against Mount St. Joseph, beating the Gaels, 35-0. Loyola has built a 7-3 record.

“That was a really good show of character on our team,” Cranston said.

Loyola intends to bring that same intensity and determination Nov. 26 at M&T Bank Stadium, when the Dons defend their Turkey Bowl title against a resurgent Calvert Hall team.

“It’s the pinnacle of the season,” said Brian Abbott, now in his eighth season as Loyola’s coach. “You love the feeling of community and the excitement that always comes with the Turkey Bowl.”

Abbott said his players are “incredibly hard workers” who don’t give up. It’s a young team, with nine sophomores and a freshman holding 10 of the 22 starting spots. The four captains have been the greatest strength of the team, Abbott said, providing leadership to the younger players.

Connor Bruns, a 210-pound senior quarterback, has been a key in setting a tone.

“It’s been a hard season for him because he’s very talented and he’s thrown the ball to a bunch of young receivers who aren’t always consistent,” Abbott said. “His personal numbers have suffered because of having inexperienced guys around him, but he doesn’t show any disappointment.”

The coach noted that if a player drops a pass, Bruns “turns right around on the next play and throws the ball right back at him.”

Cranston, who is looking at colleges in the Ivy League and the Patriot League, said he is proud of the effort the players put in – especially coming after tough losses.

“I think we’ve become closer in the past few weeks and we’re working hard,” he said. “We want to win.”

Loyola has a lot of respect for Calvert Hall, he said, a team that stood toe-to-toe with some of the conference’s elite programs.

“They are a really great team,” Cranston said, “and it will definitely be a good game.”

Like Abbott, Cranston is aware of the majesty that comes with the storied rivalry.

“There are tons of people there,” he said. “It’s a great tradition. As a player, it’s the kind of game you dream about.”