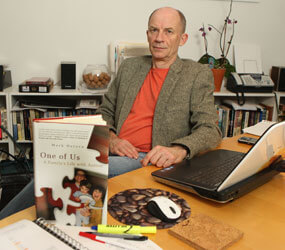 Leslie Gilden was giving her 7-year-old son a bath when the boy suddenly began kicking violently and howling at the top of his lungs. The random tantrum was far from extraordinary for Cameron, a child living with severe autism.

Hearing the ruckus, Mark Osteen – the boy’s father – raced into the bathroom. Grabbing his son by the back of the hair, Mark Osteen gave Cameron a shake. Cameron responded by bawling more loudly than before.

As Mark Osteen tells it, his wife locked him out of the room, and the two overwhelmed parents yelled at one another through the closed door. As Leslie tried to hold her son down on the wet floor to keep him from banging his head, the youngster finally stopped screaming.

Hearing that single shouted word was overwhelming for Mark Osteen. It perfectly captured all the pain, anger and frustration his son had endured his entire life. His wife opened the door, and they held each other and wept.

The dramatic personal scene is one of many depicted in Mark Osteen’s new book, “One of Us: A Family’s Life with Autism.” Published by the University of Missouri Press, the memoir tells what it’s like to raise a son with autism.

Born in 1989, Cameron showed signs of developmental disabilities early on. He was uninterested in toys, ignored other children and began showing aggression, insomnia, compulsions and physical sickness. He was diagnosed with autism at age 3.

Osteen, an English professor at Loyola University Maryland in Baltimore, said he wrote the book to help other families raising children with autism. He also wanted to provide a voice for his son, who is unable to advocate for himself.

Cameron Osteen now lives in a Hagerstown group home with others with disabilities.

“I made a vow at the beginning of writing this book to tell the whole truth and to be just as completely candid as I possibly could,” Osteen said. “Otherwise, why write?”

Osteen had read numerous books on autism, but was disappointed that so many seemed to sugarcoat what it’s like to raise a severely disabled child. They made it sound easier than it really is, he said, or they held out elusive promises of cures.

“They aren’t helpful because they give parents false impressions,” Osteen said. “They make you feel guilty or that you’re doing something wrong because your kid isn’t like those (depicted in the books).”

Two main misconceptions persist about autism, Osteen said. One is that all those with autism are savants. The other is that if a person uses the right treatment, autism will go away.

“The vast majority of children with autism are going to be adults with autism,” Osteen said. “Maybe they’ll learn to cope better and gain social skills, but they are still significantly disabled.”

Osteen said people with severe disabilities have value. Raising a son like Cameron taught him how to love a child for who he is rather than what his father wanted him to be, Osteen said.

“We often felt very isolated as we were raising our son,” Osteen said, “and that no one was helping us. We had emotions and experiences that seemed pretty outside the norm and we wondered if anyone else had ever felt this stuff. “

Osteen has a message for other parents who may be feeling that way now.

“They are not alone,” he said.

Visit www.oneofusbook.com to order the book.