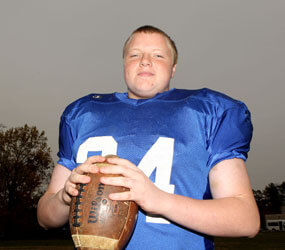 It’s been a long road to the 2010 Turkey Bowl for Loyola Blakefield senior Kevin McKeown.

After suffering an ankle injury as a sophomore season and being a reserve last year, McKeown finally broke into the starting lineup as a senior. The defensive tackle/left guard is ready to help the Dons beat Calvert Hall in the annual Thanksgiving football game, held Nov. 25 (10 a.m.) at Baltimore’s M&T Bank Stadium.

“I’ve waited a long time to get this chance,” he said

The high point might have been emerging from the tunnel before the game.

“It was totally cool,” he said. “You run out there and there’s (thousands) of screaming fans, one side’s a sea of red and the other side’s all blue. It’s intense.”

McKeown said the rivalry game is a year-round focus.

“During the summer, when you’re working out, you’re chatting up the Calvert Hall game,” he said. “Your main opponent is always next up, but in the back of your mind, Calvert Hall is huge.”

McKeown might play football next year at The John Hopkins University in Baltimore, his father’s college alma mater. McKeown is also considering the Clemson, South Carolina, Rutgers, Delaware and Elon. He has a 3.1 grade point average, is a member of the band and jazz band, and also plays rugby.

The Turkey Bowl is the final game of the season, the last ever for some players. A win would mean everything to Loyola Blakefield.

“Whoever wins Loyola-Calvert Hall,” McKeown said. “Putting on the Loyola uniform, you think about the people who went before you.”