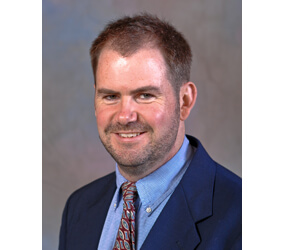 Gibbons, a former pastoral council president of St. Matthew in Northwood, was attending a fundraiser for Catholic Relief Services a few years ago when the video equipment malfunctioned. An attendee told him to go to one of the “video priests” – a Paulist – to fix it.

“I wasn’t familiar with them,” said Gibbons, 37. “Someone told me they were the priests who do all the media and communication stuff.”

His curiosity piqued, Gibbons looked the Paulists up online. Impressed with their work in communications, multimedia, campus ministries and parishes, Gibbons later met some more Paulists and attended their retreats.

Three years ago, Gibbons entered the religious order as a seminarian at Washington Theological Union in the nation’s capital. He is now three years away from priestly ordination, and is currently serving his pastoral year at a Paulist parish in Austin, Texas.

Gibbons knew God was calling him to the priesthood for at least a decade, but he readily admitted to fighting that call.

“Looking back, I think I needed those 10 years in order to do some growing up,” Gibbons said. “I know what it’s like to be in a couple of relationships, to have a mortgage and to pay bills. I don’t regret that time at all.”

Gibbons said his time as a student at Baltimore’s Loyola University Maryland helped deepen his Catholic faith. While at Loyola, he was president of the student government association and volunteered to serve homeless people in Baltimore.

Gibbons said he began to feel “tapped on the shoulder” to consider the priesthood after graduating with a psychology degree in 1994. The New Jersey native entered the Jesuit Volunteer Corps and worked as an art and computer teacher at a Phoenix inner-city Catholic school. He thought about becoming a Jesuit until discovering the Paulists, an order which seemed most suited to how he hoped to serve as a priest.

“I’m interested in the question of what it means to be an American and to have a faith tradition within a multi-faith culture,” said Gibbons, a former employee for Baltimore-based Catholic Relief Services who worked on the charity’s Web site. Gibbons said he feels supported by his family and friends in his vocation. He encouraged those considering the religious life to study their options.

“Keep people around you who are supportive of your vocation, but who have your best interest at heart,” said Gibbons, noting that no one should feel pressured to become a priest. “Talk to a lot of people who are priests and take as much time as you need to discern the call.”