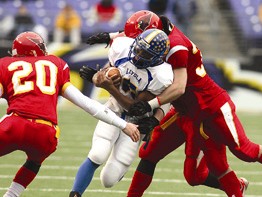 The 87th Calvert Hall-Loyola Turkey Bowl, held at M&T Stadium on Nov. 23, unfolded the way many presumed, with an overpowering performance by the Loyola Dons.

There were no surprises. The Dons (10-1, 4-1) held the Cardinals (1-8, 0-5) scoreless and came away with a 26-0 win. This makes it four in a row for the Loyola Dons, extending their lead to 46 wins to Calvert Hall’s 33. The teams have also tied eight times in the course of the annual competition. Additionally, this was the first shutout since 1995 for either team.

The Loyola-Blakefield team came into the Turkey Bowl with the MIAA A Conference title on the line. The conference win gave the Dons a share of the championship bragging rights along with the Gilman Greyhounds and the McDonogh Eagles, each finishing with a 4-1 records.

More than 10,000 fans were on hand to cheer their teams on, and despite the rain and chill in the air, students from both schools were painted in school colors, bare-chested and having a ball.

Scoring got started early for Loyola with a first quarter, one-yard run from sophomore quarterback, Leon Kinnard. Kinnard went on to score two more times in the second quarter as the Dons took a 19-0 lead into halftime. Held scoreless in the third period, the Dons gave up possession on downs in the fourth quarter to The Hall. But, deep in their own territory, junior Card quarterback Zach Blake threw a pass right into the hands of Loyola’s Bubba Harris (his second interception of the day) who walked it into the end zone for a final score. Junior Jeff Timmons, the Dons kicker, hit two of four extra point attempts.

For the Dons, the maturity and field-presence of Kinnard under snap is a reassuring factor heading into next season. Kinnard was racking up the numbers this Thanksgiving with 76 yards on the ground, 141 yards in the air coupled with those three first half touchdowns.

Supporting Kinnard’s efforts were senior running backs Kory Kopinos and Terence Garvin. The Dons ground attack marched off 352 yards to Calvert Hall’s 180 yards. In the air, the Dons were led by seniors Omari Mobley and Mike Horne, both with timely receptions that supported several long drives and eventual scores.

After the game, Mobley commented on the bottom line, “The win is a good feeling. We kept their offense off of the field which kept ours on the field.”

Loyola head coach Brian Abbott referred to his team as a “bend don’t break” squad. “We looked to maintain consistency going in early. We were so charged up early on that once we settled down, I knew we would be fine. Someone is always stepping up for us.”

For the Calvert Hall Cardinals, junior tailback Ryan Griffiths led the team with 10 tackles on the day along with solid play from tail back juniors Kevin Graves and Dan Zentz. Defensive lineman senior Jesse Tomczak also put in a solid effort for the Cardinals.