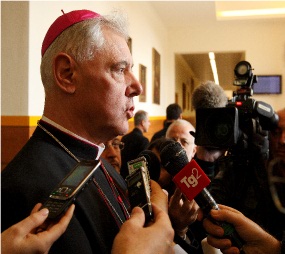 ROME – Love, honesty and devotion to Christ are essential for facing the crisis in the church and in the priesthood caused by cases of clerical sexual abuse, an Australian archbishop said.

Since the 1990s, when the scandal first broke, “everyone has learned that several points are crucial: care for the victims, following the law, dealing effectively and decisively with perpetrators, making sure we have proper procedures in place to safeguard children and backing up what we believe with our actions,” said Archbishop Philip Wilson of Adelaide.

The archbishop is a longtime participant in what is known as the Anglophone Conference, an international group of bishops and church child protection officers who have met annually for almost 20 years to identify effective strategies for combating and responding to clerical sexual abuse. .

“We must be humble and accept the pain of the present moment as the horrible realities are revealed,” he said March 11 during a break in a theological conference on the priesthood.

More than 500 cardinals, bishops and priests gathered at Rome’s Pontifical Lateran University for the opening session of the conference sponsored by the Congregation for Clergy to mark the Year for Priests.

The clerical sex abuse scandal was mentioned only in passing the first morning of the conference when an Italian sociologist said the scandal in the United States has not appeared to have a negative impact on vocations.

Bishop Gerhard Muller of Regensburg, Germany, where the latest scandal has involved the diocesan cathedral’s famous boys’ choir and school, was one of the main speakers on the opening day of the conference.

He did not mention the scandal in his talk on the role priests play in shaping culture and their obligation to promote a culture of life.

During a break in the conference, he told reporters it was “stupidity” to believe that celibacy caused clerical sexual abuse and he said that any priest who sexually abuses a child has placed himself outside of the priesthood, even before the church acts to formally dismiss him.

The connection between celibacy and sex abuse was raised in media reports March 10-11 about a message written by Austrian Cardinal Christoph Schonborn of Vienna to pastoral workers in his archdiocese. The cardinal wrote that to prevent future cases, the church needs to examine “the question of the formation of priests” and the impact of the sexual revolution of the 1960s on priests.

“The theme of celibacy as well as the theme of the development of personality” should also be studied, he wrote.

The cardinal’s secretary told Catholic News Service that journalists had misunderstood his remarks; the cardinal, he said, was not questioning the church’s discipline of celibacy for priests nor implying there was a connection between celibacy and sexual abuse.

Honduran Cardinal Oscar Rodriguez Maradiaga of Tegucigalpa told reporters at the Rome conerence, “There is no relationship between celibacy and pedophilia.”

“I do not see how there can be a connection between celibacy and abuse because there are also abusers found among those who are not celibate. It’s just that people don’t hear about it,” the cardinal said.

The cardinal, who holds degrees in clinical psychology and psychotherapy, said the Catholic Church “must compensate victims, not just with money, but with real assistance.”

Meanwhile, the Vatican’s representative to U.N. and other international agencies based in Geneva spoke of Pope Benedict XVI’s “unambiguous condemnation of sexual violence against children and young people.”

Archbishop Silvano M. Tomasi said that in cases of sexual abuse of children the victim’s “physical and psychological integrity is violated with destructive consequences,” including increased probability of teenage pregnancy, homelessness, drug and alcohol dependence.

He acknowledged the involvement of Catholic clergy and lay people in such crimes and said “protection from sexual aggression remains high on the agenda of all church institutions as they struggle to come to terms with this serious problem.”

The church is committed, he said, to ensuring transparency in the process and offering help to victims and their families “to alleviate the pain, grief and bewilderment caused by the abuse that has occurred.”

Archbishop Tomasi said that anyone found guilty of sexual abuse is suspended immediately from their ecclesial office and are dealt with according to the norms of civil and canon laws.

The most important thing is prevention, which he said “begins with education and promoting a culture of respect of the human rights and human dignity of every child,” and especially by improving methods of choosing school personnel.