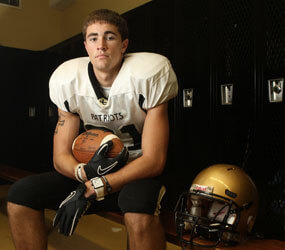 When 17-year-old John Carroll School senior Robert Darin Owens Jr., known simply as “D.J.” to friends, teachers and teammates, endured the sudden death of his father a little over a year ago, football became his mainstay.

“I had problems growing up, and football is a release,” said the three-year varsity starter and team captain. “I love the game. I like how the team is like a family – like your brothers.”

Owens’ father, Robert Darin Owens Sr., had been a regular attendee at his son’s games.

Before each game, Owens dons a helmet inscribed with the word “Dad,” as well as eye black in which he writes, “R.I.P. Dad.” A large cross with a similar message is tattooed on his right bicep – a constant reminder of the man Owens says was his best friend.

“I think about him every day,” said Owens.

At 6-foot-6-inches tall, the quick wide-receiver is one of the best in the Maryland Interscholastic Athletic Association B Conference, according to Larry Dukes, John Carroll’s athletic director.

Aside from winning, Owens said his objectives include getting himself “to a place where I can play to my highest potential.”

“I want to make sure everybody is motivated and ready to play,” said the teen.

Owens’ coach, Rich Stichel Jr., said Owens has had more than 20 catches, nearly 300 yards and six touchdowns this season. He has been an All-MIAA selection and has been nominated for other All-Star teams.

“He has all the potential to play at the next level,” said Stichel. “He just has to continue to improve his work ethic. He has overcome a lot of adversity in his life and has done a good job at not letting the past hinder his ability to be successful in life.”

He said the receiver is gifted in both size and ability, making it a challenge for opponents to track his moves on the field.

“We are very proud of his accomplishments and his toughness on and off the field,” Stichel said. Most kids his age would not be able to overcome and persist and be as successful as D.J.”

Owens, who has a 3.3 grade point average, plans to continue playing football at the college level.