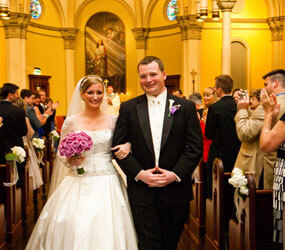 Halfway through her junior year at the College of Notre Dame of Maryland, Meghan Walton Young was despondent after her boyfriend abruptly ended their relationship.

She walked into Marikle Chapel of the Annunciation on the second floor of Theresa Hall.

“I asked God to heal my pain and give me the strength to keep up my studies and maybe help me move on,” said the now 26-year-old Young. “I felt so close to God in that chapel, I always felt like he was there. For the next year and half I tried to go and sit and pray once a week.”

The parishioner of St. Agnes in Catonsville had always dreamed of the kind of a fairytale wedding and wanted to find her Prince Charming.

She found him in Patrick Young, an old high school friend. After more than three years of dating, he proposed during a trip to Italy.

“I knew we needed to be married in the Marikle chapel because that’s where God had answered my prayer and it just wouldn’t be right anyway else,” she said.

It was one of about 35-40 weddings that takes place in the 250-seat Marikle Chapel each year on Fridays, Saturdays and Sundays.

It never occurred to Jennifer Broadwater that she would be married there.

As she was planning her wedding in the winter of 2007, a friend told her about one she attended at the chapel.

“I’m surprised I hadn’t thought of it earlier, since both my mother and aunt are graduates,” Broadwater said. “My parents met while in college, as my dad attended Loyola next door so it’s just a special place for my whole family.”

Her mother, Rita Surface, remembered that the chapel had undergone renovations in 2002. It was restored to its 1890s glory, revealing round arches and high-vaulted ceilings. Stained glass windows were refurbished and new high windows were added to provide natural light.

An altar, tabernacle and pews were installed as well.

The brightly-lit church features a mural a spectacular painting of the Assumption of the Blessed Virgin Mary. A baby grand piano and organ are also on-site for musicians.

“I’m pretty sure I couldn’t help but smile when my mom and I were walking through the chapel,” Broadwater said, “and, noticing that, my mom said something like, ‘Jen, I think this is it.’ ”

Broadwater met her husband Luke, a fellow reporter, while working for the Howard County Times/Columbia Flier newspapers. She is now assistant news editor for the weekly newspapers.
Broadwater didn’t always have a plan for a wedding.

“I was a very shy kid, so I think the idea walking down an aisle with everyone’s eyes on me was a bit terrifying,” she said. “I still had to come to grips with this at age 27.”

Luke’s father, a Presbyterian ministerm and St. Francis of Assisi, Fulton, pastor, Father Dennis P. Diehl, concelebrated the wedding in the chapel, which is open for both Catholic and non-Catholic weddings.

Bogda Soltys coordinates weddings for the school’s conference services office. Costs range between $600-800, with discounts for students, alumnae and relatives of School Sisters of Notre Dame and friends of the college.

“She was wonderful and truly helped me with whatever I needed,” said Young, a former Catholic Review reporter and current Notre Dame transfer counselor.

Soltys said she develops relationships with the couples as they prepare for the nuptials.

“We e-mail and call each other,” she said. “I tell them, even if they’re in the shower and remember something; I’m here to help them.”

She meets with the couples two weeks before the wedding. During her five years at Notre Dame, Soltys has seen nearly every wedding. Yet, the romanticism of the ceremony has remained.

“I love it,” she said. “It’s so joyous. Something beautiful is being created. It’s the most important day of their lives.”

For both Young and Broadwater, it was a day they will never forget.

“I couldn’t be happier with our wedding day,” Broadwater said. “It was just what I wanted.”

When she was little, Young’s father would take her on roller coasters. As the ride would begin, he’d lean over and say, “Here we go.”

As the doors opened and the chapel was revealed on her wedding day, he repeated that phrase.

“I felt like God was watching over us,” Young said, “and as I was walking down the aisle and the calmness came over me I knew it was a peace that only God could give me.”

Requests for dates and availability should be directed to Soltys at 410-532-5781 or events@ndm.edu.