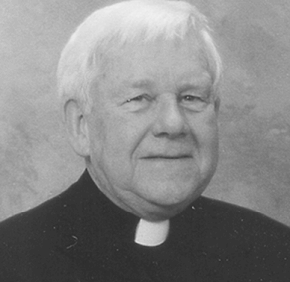 By George P. Matysek Jr.
gmatysek@CatholicReview.org
Twitter: @ReviewMatysek
Father Edward C. Connelly, former longtime pastor of St. Elizabeth Ann Seton in Crofton and an advocate for social justice, died Aug. 18 at age 80.
“His specialty was dealing with people one-on-one,” said Jack O’Malley, pastoral administrative associate at St. Elizabeth. “So many people have said that in their time of need, they really felt his comfort, his consolation and his presence.”
Father Connelly served as pastor of St. Elizabeth from 1987 until his retirement last year. While at St. Elizabeth, he established a sister parish relationship with St. Gregory the Great in West Baltimore and with a parish in Haiti. He oversaw the addition of a food pantry during the parish’s 2007 renovation and expansion, and supported an outreach to those in poverty, hosting homeless men at night for a week through Anne Arundel County’s winter relief program.
In a 2009 interview with the Catholic Review, Father Connelly noted that there had been a long tradition at St. Elizabeth of people bringing canned goods to Mass for those in need.
“The cans are then carried up in baskets for the collection – every Mass, every Sunday,” he said. “I think that the parishioners here have got the message of Jesus that you don’t come to church just to receive, but you come to give.”
A native of Bangor, Maine, Father Connelly attended the University of Maine before joining the U.S. Air Force Band, where he played clarinet and saxophone while stationed at Bolling Air Force Base in Washington, D.C., from 1953 to 1957. After leaving the Air Force, he attended St. Jerome’s College in Kitchener, Ontario, and St. Mary’s Seminary in Baltimore.
Father Connelly was ordained in Portland, Maine, in 1965, joining the Sulpicians, a society of diocesan priests dedicated to priestly formation. He returned to Baltimore to teach at St. Mary’s Seminary from 1966 to 1969.
He earned a master’s degree in philosophy from the University of Notre Dame in Indiana and a doctorate in philosophy from Emory University in Atlanta.
Father Connelly taught at St. Mary’s College Seminary in Catonsville from 1972 to 1976 while serving part time as an associate pastor of St. Pius X in Rodgers Forge. In 1976, he became a full-time associate pastor of St. Pius X, where he ministered until he was named pastor of St. Elizabeth Ann Seton. He was incardinated to the Archdiocese of Baltimore in 1979.
Father Richard Hilgartner, a Baltimore priest who serves as director of the U.S. Bishops’ Secretariat for Divine Worship in Washington, D.C, grew up at St. Pius X during the time Father Connelly was assigned there. Father Hilgartner received his first Communion from the priest and volunteered as an altar server with him. The priestly example of Father Connelly and other clerics at the parish inspired Father Hilgartner to follow in their footsteps. Father Connelly was present for Father Hilgartner’s ordination.
“He was always a good listener,” said Father Hilgartner, who will deliver the homily at Father Connelly’s funeral Mass, Aug. 22 at 11 a.m. at St. Elizabeth.
“He was like a member of the family,” Father Hilgartner said, noting that Father Connelly often had dinner with the Hilgartners, who lived across the street from St. Pius. Father Connelly also baptized or served as godfather for several of Father Hilgartner’s nieces and nephews.
As a seminary instructor, Father Hilgartner said, Father Connelly was “well-grounded” in theology.
“His vision of the priesthood was shaped by Vatican II,” Father Hilgartner said. “He empowered the faithful in collaborative and collegial ministry.”
O’Malley, who worked with Father Connelly for 25 years, said the priest was “the kind of pastor you would like to have at any parish.”
“He was a wonderful, compassionate priest,” O’Malley said.
A viewing will be offered from 7-9 p.m. on Aug. 21 at St. Elizabeth Ann Seton. Bishop William C. Newman will offer the funeral Mass Aug. 22 at 11 a.m. at St. Elizabeth. The Mass will be preceded by a viewing from 9-11 a.m.
PrevNext