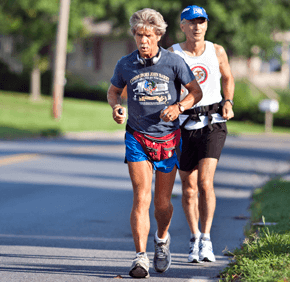 After nine days and 250 miles on foot, long-distance runner Tom McGrath strode July 28 onto the grounds of the U.S. Naval Academy in Annapolis, where a memorial to recognize naval commander Commodore John Barry is under way.

McGrath, 61, hoped his journey from New York City to Annapolis would raise awareness of Barry’s accomplishments and funding for the memorial’s completion. Many consider Barry the “father” of the U.S. Navy.

“This run is an honor and a privilege,” said McGrath, who, as was Barry, is an Irish-born American Catholic.

Baltimore members of the Ancient Order of Hibernians have participated in efforts to erect a memorial in Barry’s honor, ensuring the commander’s contributions during the Revolutionary War and the Navy’s formation are not forgotten.

Founded in the 1830s to fight Irish and Catholic discrimination, the Ancient Order of Hibernians, or AOH, is the United States’ oldest and largest Irish-Catholic organization. It promotes Irish culture and charitable outreach.

McGrath has been a member of the AOH for 15 years, he said. Raised in County Fermanagh, Northern Ireland, he has spent four decades in New York City, where he owns an Irish bar.

The 250 miles from New York City to Maryland’s capitol are a fraction of McGrath’s more impressive distances. He started running in 1965, and once held the Guinness World Record for running 3,046 miles across America, a feat he endeavored in 1977. He has also completed several 1,000-mile runs and has logged hundreds of miles for charities.

At the beginning of McGrath’s run about $40,000 was still needed to finish the $200,000 project, which includes a gate, plaza and granite monument. The run’s organizers held fundraisers throughout the route, with local events in Bel Air, Baltimore and Annapolis.

An Irish band entertained a crowd which attended a July 26 fundraiser at the Irish Railway Workers’ Museum in Baltimore, where McGrath visited with supporters.

The day’s temperature nearly hit 100 degrees, but McGrath had finished the 24-mile leg from Bel Air earlier than expected, motivating him to run an extra four miles he could subtract from the next day’s journey.

“Every morning there’s a major mental battle from the minute that you wake,” when running long distances, he told the Catholic Review.

Despite the challenge, McGrath made a promise to God, America, Ireland and the AOH that he would complete the run, he said, and he intended to fulfill it.

He tripped on a wire the second day of the trek, somewhere between Hamilton Square, N.J., and Bristol, P.A., and fell hard – the first time he had ever fallen during a run, he said.

At first, fearing injury, he thought the run was over, he said. Then he changed his mind. “I said (to himself), Commodore Barry was bleeding too, but you can’t drop out because you fell down,” he said.

He often thinks of Barry, who was once wounded during battle but continued to command his ship, forcing the enemy to surrender, McGrath said.

Tim Harvey, AOH Maryland State president, said that McGrath’s run spread interest in Barry’s life, and he hopes the memorial does the same.

“I think it will be very educational for people to see that this is another Irishman who came to this country and who did well and gave back to the country that adopted him,” he said.

Jack O’Brien, the historian for the Washington, D.C., AOH who spearheaded the construction efforts, said that the organization has worked diligently with the Naval Academy to ensure the memorial will be built. The project was approved in 2007 and scheduled to be completed by September 2013.

In addition to the commodore, McGrath has been motivated by the people cheering his efforts along the way.

Enthusiastic supporters helped to make this run the best of his life, he said.

“They thank you from their heart,” he said. “Some of them nearly have tears in their eyes. That’s what I mean by dedicated people. When you run across America, it’s not the same. This here, it’s a mission.”