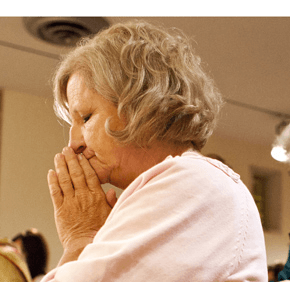 By Elizabeth Lowe
elowe@CatholicReview.org
Twitter: @ReviewLowe
FULLERTON – Parishioners frequently ask priests to pray for their needs, but how often do parishioners return the favor?
Tricia Baynes, wife of Deacon Charles A. Baynes, a deacon at St. Joseph in Fullerton and pastoral associate of Our Lady of Mount Carmel in Essex, formed the St. John Vianney Spiritual Motherhood Society, whose female members have prayed for anonymous priests since 2010.
“I saw the need for prayers for priests through my husband’s ministry,” said Baynes, 60. “It’s simple and powerful.”
The group is named for St. John Vianney, patron saint of priests. His feast day is Aug. 4.
The society gathers on the third Saturday of each month – it next meets Aug. 18 at St. Joseph, Fullerton – for Mass, Eucharistic Adoration, and to pray the rosary. Members also pray on their own.
In the past two years, Baynes has disseminated “Pray for Priests” car magnets and 1,600 pamphlets throughout the archdiocese.
“Women are out there praying,” said Baynes, a school psychologist for Baltimore County Public Schools. “It doesn’t matter how many people I have coming, it matters how many people are praying. That’s what’s important.”
Before the final blessing at Mass July 21, Monsignor Kevin T. Schenning, pastor of St. Joseph, spoke about the importance of praying for priests.
“That little extra keeps us going,” Monsignor Schenning said. “What greater way to help priests. Prayer makes a difference.”
He challenged the congregation to take 20 minutes whenever possible and pray the rosary.
“We need prayer,” Monsignor Schenning said. “Step up and pray a little bit more.”
Before the group of 20 women and four men – which included members of the parish’s Respect Life group – prayed the rosary in the Fullerton parish’s chapel July 21, Baynes asked those gathered to pray for clergy who “responded ‘yes’ to the will of God.”
Baynes said to the 10 spiritual mothers present that it’s “truly God’s blessing, you being here. We know God has given us graces to pray for priests.”
During Eucharistic Adoration, Deacon Charles, who recently marked the 30th anniversary of his ordination, said “our prayers are needed today for our priests. They have much work to do. Jesus will open the door, he will find more priests. Just keep praying as you’re doing now.”
St. Joseph parishioner Becky Drinks, who has been a member of the group since its inception, said priestly ministry is “crucial in our world today.”
“Meeting once a month to pray for priests is extremely important,” said Drinks, 55. “It keeps me accountable in praying for them.”
Kathleen Krasowski, 64, a parishioner of St. Michael the Archangel in Overlea, who has also been a member of the group since its founding, said priests face the same “trials and difficulties as the everyday person has.”
“We pray that graces will come to them and help them make it through each day,” Krasowski said.
Copyright (c) July 31, 2012 CatholicReview.org
PrevNext