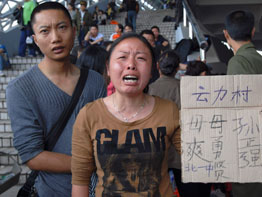 MIANYANG, China – Sister Zhang Yimei expressed gratitude to God for protecting her younger brother, a priest, during the recent earthquake, but is concerned for the well-being of the family of another nun serving in her parish.

“My brother, Father Francis Zhang Yiqiang, was preparing for the centenary of the former seminary in Bailu town and just happened to be out buying things for the celebration when the church building collapsed,” she told the Asian church news agency UCA News.

The siblings serve in different parts of the Chengdu Diocese, near the epicenter of the magnitude 7.9 earthquake that shook Sichuan province in southwestern China May 12.

Sister Yimei, 35, who serves at Our Lady of Lourdes Church in Mianyang, told UCA News May 14 that the other nun, who was only identified as Sister Zhan, could not reach by phone her parents, one sister and two brothers-in-law in Bailu after the quake. She said Father Zhong Cheng, the parish priest, had driven to her home to find out what happened.

Sister Zhan was worried because her mother had hurt her foot earlier and could not walk properly, Sister Yimei said. She added that the last words Sister Zhan heard from another sister, while talking to her on the phone as the quake hit, was, “Our house is collapsing! I have to flee!”

She said Father Zhong also wanted to visit quake victims in Beichuan and An counties, two of the worst-hit areas, but the roads were damaged. The church and many houses there are now unsafe, she said.

The British news agency Reuters reported May 15 that China’s death toll from the earthquake could rise to 50,000 people.

In the city of Mianzhu, less than 30 miles away, several people were killed when their houses collapsed, Sister Yimei said. She said people preferred to sleep outside in tents after the quake.

Father Zhang, 33, expressed his sadness at seeing the devastation in Bailu, where he serves. But he said he was thankful that three caretakers who were inside Annunciation Seminary when it collapsed were rescued.

He said Bailu’s two Catholic churches – one of them was built in 1998 – were destroyed.

A layperson was injured as a result of the churches collapsing, but “many Catholics were trapped and injured as their own houses collapsed,” Father Zhang, who was sobbing, told UCA News in a telephone interview May 14.

Father Zhang said no drinking water or electricity is available in Bailu. There, as in other cities, people have moved out of their houses, fearing collapse, and are staying in tents on the streets, he said.

“Now without any church in Bailu to celebrate Mass, some parishioners have hung holy pictures inside their tents, and we have recited the rosary together,” the priest said.

The courtyard of St. Francis Cathedral in downtown Xi’an has become a refuge for local people since the quake hit. Xi’an, capital of Shaanxi province, is 360 miles northeast of Wenchuan, the quake’s epicenter.

Dozens of kindergartners led by their teachers were among more than 100 people who sought refuge there.

Bishop Anthony Dang Mingyan of Xi’an told UCA News the cathedral welcomed the area residents and children who rushed there seeking refuge. As the daytime temperature rose to about 86 degrees, church workers distributed drinking water and snacks and provided stools to sit on.

The priests and nuns who serve at the cathedral looked after and spoke with the people to ease their tension.

“We accompanied them, especially those who were frightened after experiencing the quake. Many of them have no religious belief,” Bishop Dang said.

Since the church courtyard is the only large open area in the neighborhood, he said, many people brought tents and blankets to sleep there for two nights, until May 14, when they felt there would be no more aftershocks.

Bishop Dang said he worried the century-old cathedral might not stand further aftershocks but said “it is still in pretty good condition.” Parish priests reported that other churches in the diocese were hardly affected.

The bishop and his priests have offered prayers for victims at special Masses since the earthquake.

Churches in the Hanzhong Diocese, also in Shaanxi, suffered more damage; Hanzhong is about 250 miles from the epicenter. Bishop Louis Yu Runchen of Hanzhong told UCA News that dozens of people in the area died.

On May 14 and 15, the bishop inspected the six churches that he said were unsafe due to different degrees of damage.

“Our diocese is financially unable to repair and rebuild the churches,” he said, noting he would report the damages to the local religious affairs bureau.