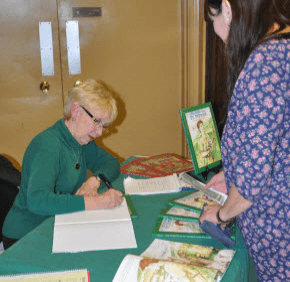 By George P. Matysek Jr.
gmatysek@CatholicReview.org
You can’t ask for a better adventure story than the life of St. Patrick.
Born of noble parents in 4th-century Roman Britain, the famed saint was captured by marauders as a child and enslaved in the wilds of pagan Ireland. He eventually escaped, only to hear God calling him to return to the land of his captivity to convert an entire nation to Christ.
Ellen Cook Nibali, a parishioner of St. Louis in Clarksville, tells St. Patrick’s true story in a new children’s book, “The Puzzles of St. Patrick: From Slave to Saint.” Each page of the colorful, hard-cover volume features large illustrations by Lon Eric Craven, an artist whose work has been featured in the Kansas City Star.
Nibali, also author of a children’s book about St. Nicholas, was inspired to write about St. Patrick after listening to a homily a few years ago delivered by her pastor, Monsignor Joseph Luca. The priest portrayed St. Patrick as one of the greatest evangelists of all time – focusing on known events rather than the many myths that have arisen around the saint.
“As Monsignor Luca told St. Patrick’s life story,” Nibali remembered, “my jaw was open. I couldn’t believe I had never heard his story before.”
Nibali based her book on St. Patrick’s actual writings. In her telling, there are no references to St. Patrick driving the snakes from the Emerald Isle – a popular myth Nibali says was meant to be symbolic of his driving out evil.
“The legends and myths are a lot of fun,” she said, “but, if you focus on them, it’s easy to miss the real man. I want children to feel the energy of this man’s life and get caught up in the excitement.”
Nibali, a gardening columnist for The Baltimore Sun, called it “phenomenal” that after being enslaved in Ireland and working as a shepherd, St. Patrick would choose to minister on the Emerald Isle.
“Forgiveness is such a hard thing,” she said. “He rose above his experiences.”
Nibali said it took courage for St. Patrick to preach the Gospel in Ireland, an uncivilized place the Romans avoided “because it was so scary.”
“Ireland was considered the end of the earth at that time,” the author explained. “St. Patrick went where no one else wanted to go. He went to the wilderness.”
Monsignor Luca said “The Puzzles of St. Patrick” does a “great job” showing St. Patrick, a bishop and patron saint of Ireland, as he really was.
“I think children are open to hearing the great stories of the saints,” he said. “Through those stories, they can be inspired.”
The pastor called it “humbling” to know that his homily on St. Patrick from years ago planted the seed for a book.
“It’s amazing how the Lord can take those words and make them come alive beyond our imagining,” he said.
“The Puzzles of St. Patrick” sells for $16.95. To order the book, visit fairlandbooks.com.
Also see:
School news: A physicist, Dr. Seuss and award recipients
One year in, Pope Francis continues to confound, inspire
PrevNext