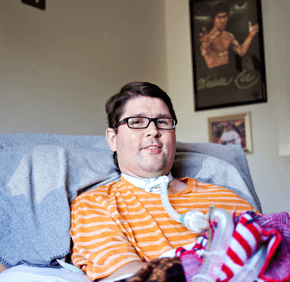 By Maria Wiering
mwiering@CatholicReview.org
CUMBERLAND – “Dear fellow parishioners: My name is Shane Crawford and I want to share with you how God was worked in my life.”
That’s how Crawford, 32, opened a letter to Our Lady of the Mountains in April. It was a note of gratitude for prayers and support, but one that also explained why, despite taking his Catholic faith seriously, Crawford isn’t a regular at Sunday Mass. He has Duchenne muscular dystrophy and relies on an electric wheelchair for mobility and ventilator to breathe.
“Doctors said I wasn’t supposed to make it past my twenties,” he wrote, “but I’m still here! If that’s not the hand of God, I don’t know what is.”
Sitting in the backyard of a house he shares with his mother, stepfather and dogs in early August, Crawford described why he feels blessed.
“I have a strong faith in God and a positive attitude and a wonderful family to back me up,” he said. “People ask, ‘Do you have a lot of bad down days?’ Sometimes I wish I could do this or that, but not really.”
Duchenne muscular dystrophy causes muscular degeneration and afflicts the respiratory system. A genetic disorder, it affects about 1 in 3,600 boys; girls can carry the gene mutation, but rarely display symptoms. Average life expectancy is 25.
Crawford doesn’t know relatives who suffer from the disease. As a child, his legs got weak and he fell down often enough to indicate a problem. He was diagnosed at age 5 and in a wheelchair by age 10. Around 15, he lost dexterity in his hands. He’s endured a series of surgeries, including a tracheostomy to assist his breathing.
“I accepted it at a young age,” he said of his disability. “That’s probably the best thing I could have done.”
He describes his approach as having a “no-quit attitude.”
“This disability has made me stronger,” he said. “I’m thankful for what I have and don’t take life for granted.”
Creative expression
Crawford has written poetry with the help of a scribe, and painted using his mouth to guide the brush. A local gallery once displayed his abstract art and poems.
He toys with writing a biography or novel about his life to help others understand living with muscular dystrophy.
“I can’t get myself a drink, bathe myself, clothe myself,” he said. “You can’t itch your nose when it itches really bad.”
Crawford writes a column on people with disabilities for Allegany Magazine, a local lifestyle publication, with a specialized computer that follows eye movements to type words. He also writes blues songs and searches the Internet the same way.
Among Crawford’s proudest accomplishments is the black belt he earned in 2007, when he had better mobility. When he was 21, he began working with a local karate sensei to develop self-defense techniques using his wheelchair. To earn the black belt, he also wrote a paper and passed a test on his karate knowledge.
Crawford has since lost the ability to perform karate moves, but marital arts tattoos on his arms testify to an abiding passion.
‘God has a plan’
Crawford loves visitors, and wishes he had more. A frequent guest is Father Stephen B. Fernandes, who hears his confession and brings him Communion.
“Each visit to this young man opens for me a vista of Calvary , not just in the suffering Shane endures but in the joy that radiates from him receiving the body of Christ,” wrote Father Fernandes, a Capuchin Franciscan and associate pastor of Our Lady of the Mountains, in a note accompanying Crawford’s letter to the parish.
Crawford is a convert, drawn to the Catholic faith after a friend invited him to Mass in his early 20s. He was confirmed in 2004 and has devoted time to understanding its teachings on the saints, Mary and the sacraments.
He also thinks about death, but tries not to worry about it.
“I just live my life. When you have a strong faith in God and a positive attitude, you don’t have to worry about dying,” he said. “God has a plan for every one of us. He has the blueprints for our life, and it’s only him who truly knows.”