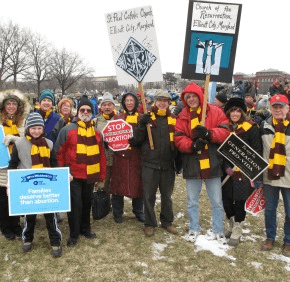 WASHINGTON, D.C. – The first flakes of snow were just beginning to fall on the grounds of the National Monument when former Ravens center Matt Birk took the stage Jan. 22 to rally participants in the 2016 March for Life.

“Me neither,” he said, apparently not hearing all the “Yes”s muffled by scarves and facemasks.

The longtime pro-life voice, now director of football development for the NFL, noted that there were many reasons to be participating in the march “in addition to what we’ve seen in the last few months” with the release of undercover video in which Planned Parenthood employees discussed the monetary value of body parts of aborted fetuses.

“We march because I’ve never heard a woman give birth to a baby and say, ‘I wish I’d had an abortion,” Birk said.

“Because I’ve never heard of a worker at a life clinic leaving and going work for an abortion clinic – that’s why we march,” he added.

The theme of the 2016 march – Pro-Life and Pro-Woman Go Hand in Hand – resonated with those from the Archdiocese of Baltimore who participated despite predictions of an apocalyptic snowstorm.

Flo Dayberry, a parishioner of St. John the Evangelist in Frederick, said being pro-life and pro-woman “means embracing rather than repudiating all of women’s creative potencies.”

“It means extending to women and children every available health in society so they can live an abundant life with fulfillment,” Dayberry added.

Sue Ellen Browder, author of “Subverted: How I Helped the Sexual Revolution Hijack the Women’s Movement” and a rally speaker, also rejected the idea of abortion as an asset to women. Browder was fired in 1969 “for being pregnant,” she said, and found a new job at Cosmopolitan magazine.

She wrote about abortion as “the royal road to women’s freedom.”

“I was wrong,” she said, repeating the statement for emphasis. “Women are most empowered and most free when we are interconnected with others in love.”

Those who braved the grim weather forecast were much more concerned with the harm outlined by Browder than with any that could result from the weather.

“We’ve been here in worse, and you can’t remain silent,” said Sandi Nettina, chair of the pro-life committee at St. Paul in Ellicott City. “You have to stand up and witness for the right thing.”

She noted that “more people are paying attention” to the pro-life movement, “thanks to some media who aren’t afraid to go against Planned Parenthood.”

Confirming her assessment, Todd Caldis, a parishioner of Church of the Resurrection in Ellicott City and a first-timer at the March for Life, stepped forward to say that the undercover video footage mentioned by Birk had “shocked me out of my complacence about the need to stand up for life.”

Ruth Dawkins, a parishioner of New All Saints in Liberty Heights who calls herself a “roaming” Catholic, has been attending the March for Life for about a dozen years. (Erik Zygmont/CR Staff)

Breaking through complacency has long been a goal of Ruth Dawkins, a parishioner of New All Saint in Liberty Heights who has been attending the March for Life for about a dozen years.

“Young people need our help to realize that God wants us to be faithful more than successful,” Dawkins said, adding that success is not worth the value of a life.

“We need to let them know that if God gives them a baby, he’s going to provide,” she added. “It’s a matter of trust.”

Several participants and speakers noted that participants in the March for Life and associated activities are getting younger.

“Fifteen years ago, I would say, the majority of people were over 40,” commented Linda Brenegan, director of the archdiocesan Office of Respect Life, before the march. “Now I would say the vast majority are 25 and under. … It’s so encouraging to see young people responding to this pressing cause.”

At the Youth Rally and Mass for Life, held at both the Verizon Center and the DC Armory the morning of the march, 15-year-old Joey Hayden called life – and by extension the pro-life cause – “something that matters more than anything else.”

Participants in the Mass for Life and Youth Rally, pictured, as well as March for Life from the Archdiocese of Baltimore wore maroon and yellow scarves for easy identification. (Erik Zygmont/CR Staff)

“I have little cousins who are five years old,” said Hayden, a participant in the youth program at Church of the Resurrection and St. Paul. “They’re so much fun – it’s life itself that matters.”

“I think babies are a sign of hope,” he said, adding that he wants all mothers and fathers to see them the same way.

“I want the men who struggle with abortion – boyfriends or husbands – to know that they have what it takes to be a good father,” said Cartagena, 31, who has come to Washington for 17 years to participate in the march and other pro-life activities held annually on the anniversary of Roe v. Wade.

“I want the women to know they are loved by God, and that the life of the child is a blessing.”

Father Christopher Seith, parochial vicar of Our Lady of Mercy in Potomac, a parish of the Archdiocese of Washington, emphasized in his homily for the Mass for Life that the value of life should never be measured by flawed human standards. He talked about his brother-in-law, an athletic man who had been embarrassed on his first skiing outing with his future wife.

“He had to suffer the realization that there were more things in him to be loved than those things he thought were lovable,” Father Seith said.

The priest mentioned ads for the clothing store Hollister, which ironically feature “typically a guy not wearing much clothes at all, with a body that looks like a work of art like a Greek god.”

He referenced the growing tendency to silo away the elderly, or even kill them through the practice of assisted suicide.

“This is the culture that legalized abortion,” Father Seith said.

“What we need is a new vision of our worth in God’s eyes.”

Finding healing after an abortion in the Archdiocese of Baltimore – See more at: http://www.catholicreview.org/article/news/local-news/finding-healing-after-an-abortion-in-the-archdiocese-of-baltimore#sthash.fzE4xUnR.dpuf

Bigger fight against assisted suicide in Maryland expected in 2016 – See more at: http://www.catholicreview.org/article/life/life-news/bigger-fight-against-assisted-suicide-in-maryland-expected-in-2016#sthash.I99n9t15.dpuf