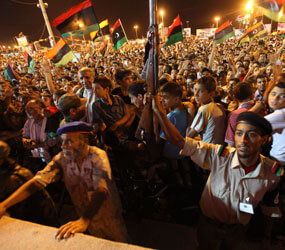 TRIPOLI, Libya – The head of Libya’s rebel forces, claiming they had taken the capital, said dictator Moammar Gadhafi had tried to scare people by saying that Islamic extremists were part of the rebel movement.

Mustafa Abdel-Jalil called on all Libyans to respect the lives of others and urged the rebels to show the world that Libya is a country of “religiously moderate” people.

“Moammar Gadhafi will be remembered and his period of rule through the acts that he committed against the rebels and the world,” he said Aug. 22.

“But God has chosen that Gadhafi’s end should be at the hands of these youths, so that they can join the Arab Spring that is going around the Arab nations. And now I say with all transparency that the era of Gadhafi is over,” he said.

Earlier this year, a Franciscan priest who has worked in Libya for seven years told Catholic News Service that Christians were afraid Islamic fundamentalists would take over the country if Gadhafi fell. He said that, under Gadhafi, Christians had been protected.

Libya is a Muslim country, with Christianity restricted mostly to enclaves of foreign workers, many of whom were evacuated earlier this year.

As of early afternoon Aug. 22, gunfire in the streets of Tripoli continued.

“It is a disaster,” a local source in the capital told Fides, the news agency of the Congregation for the Evangelization of Peoples.

“We do not know how the situation is evolving because leaving the house means risking one’s life,” said the source, who asked to remain unnamed for security reasons.

Sources in Tripoli told Fides that the rebels launched their offensive the night of Aug. 19. Fighting began in the morning Aug. 20 and intensified Aug. 21, especially during the early stages of the ground offensive, the sources said.

“Many fear a bloodbath,” the source said. “While part of the population has left town, many of those who have remained are in the situation ‘wait and see.’ ”